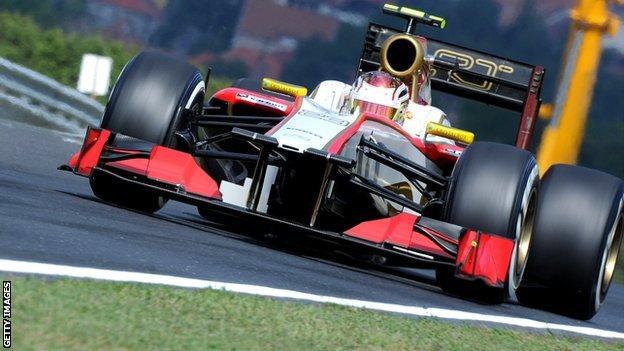 Formula 1 could feature 11 teams next season after struggling Spanish-based HRT were not included on the official entry document for 2013.

The 22-car list was published by the FIA following Friday's deadline for teams to pay their entry fees.

The team was founded by Spanish ex-Formula 1 driver Adrian Campos in 2010, but have not scored a point in their three-season existence.

Last month it was announced HRT was for sale and searching for a buyer.

At the time a statement said the HRT's owners were "in talks with a number of groups interested in buying the team".

Veteran racer Pedro de la Rosa and Indian Narain Karthikeyan were HRT's drivers this season, but both finished in the bottom two of the drivers' standings.

Additionally, the team finished at the foot of the constructors' championship, having beaten Marussia in the two previous seasons.

HRT's technical director, Toni Cuquerella, tweeted: "Four years ago I suggested to a friend to make an F1 team. Today after three seasons he has written the last page of HRT."