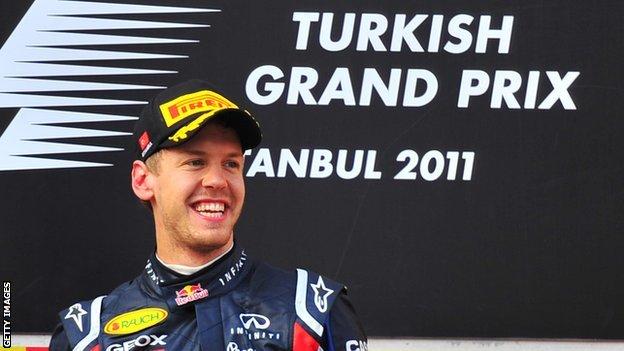 Formula 1's bosses have tweaked next year's schedule to make space for an extra race, bringing the calendar back up to 20 grands prix.

This is expected to be a return of the Turkish Grand Prix which was dropped after 2011 for financial reasons.

Efforts have been made in recent days to agree a new deal in Istanbul.

The German Grand Prix has been moved to 7 July, freeing up its previous date of 21 July for what governing body the FIA says will be another "European event".

Strictly speaking, the Turkish Grand Prix track is not in Europe - it is on the Asian side of the Bosphorus. But it is often referred to as a "European" race.

An FIA statement from the World Motorsport Council, which is meeting in the Turkish city this week, said the new race was "subject to approval by the relevant" national sporting authorities.

And there have been efforts in recent months to revive the French Grand Prix, which was last held in 2008, but it is thought that an agreement on that event is still some way off.

There has also been a report that the extra race could be at the Red Bull-owned A1-Ring in Austria, which last held a grand prix in 2003 but has been refurbished in recent years.

The addition of a 20th race means next year's calendar will contain as many grands prix as this year's record schedule.

The World Council also ratified a series of previously announced changes to the F1 rules.

Of these, the most important are:

It was also decided that the plan to make cars run on electric power alone in the pit lane from 2014, when F1 is introducing 1.6-litre V6 turbo engines with extensive energy recovery, would be delayed until 2017.

And the FIA has abandoned changes for 2014 that were scheduled to be made to bodywork design to enhance efficiency by reducing downforce and drag.