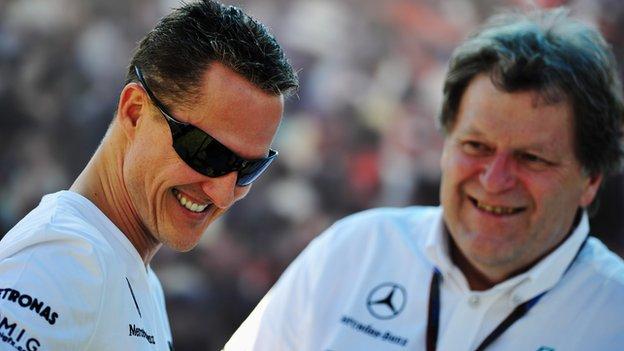 Mercedes head of motorsport Norbert Haug is to quit the role he has held for 22 years at the end of December.

The 60-year-old had led Mercedes' presence in Formula 1 since it returned as Sauber's engine supplier in 1993.

A Mercedes statement said he was leaving "by mutual agreement".

Haug's departure comes two months after triple world champion Niki Lauda was taken on as non-executive director, liaising between the board and the F1 team.

Unfortunately, with one victory in 2012 since founding our own Formula 1 works team in 2010, we couldn't fulfil our own expectations.

Haug was instrumental in the decision to set up Mercedes' own F1 team by buying the world champion Brawn outfit at the end of 2009.

Prior to that, Mercedes had competed in F1 as an engine supplier and then from 1998 as part-owner of McLaren.

The decision to run its own team led to Mercedes ending its 40% shareholding in McLaren, who continue to use Mercedes engines.

Since Mercedes GP made its debut in 2010, McLaren have won 18 grands prix to Mercedes' one.

Haug was also heavily linked to the return of Michael Schumacher after three years in retirement. The German legend has retired for a second time following Mercedes' decision to recruit Lewis Hamilton for 2013. Schumacher scored one podium finish in his three years with Mercedes.

Under Haug's leadership, Mercedes engines won the F1 world drivers' title with McLaren three times, with Mika Hakkinen in 1998-99 and Lewis Hamilton in 2008.

McLaren-Mercedes won the constructors' title in 1998 and scored more points than any other team in 2007, only to have the title expunged following the 'spy-gate' scandal, in which McLaren's chief designer Mike Coughlan was found to have nearly 800 pages of confidential Ferrari technical information.

Mercedes also powered Jenson Button and Brawn to the drivers' and constructors' titles in 2009.

Dr Dieter Zetsche, head of Mercedes-Benz cars and chief executive officer of the Daimler Group, said: "Norbert Haug was the face of the Mercedes-Benz motorsport programme for more than 20 years.

"For me, he put his stamp on a whole era and, as a highlight, he was responsible for the successful comeback of the Silver Arrows to Formula 1."

Haug, who has run Mercedes' motorsport division since October 1990, added: "Since 1991, we had tremendous achievements and wins, for which I want to thank all of my colleagues.

"Unfortunately, with one victory in 2012 since founding our own Formula 1 works team in 2010, we couldn't fulfil our own expectations.

"However, we have taken the right steps to be successful in the future. Our team and our drivers will do everything to achieve these goals."