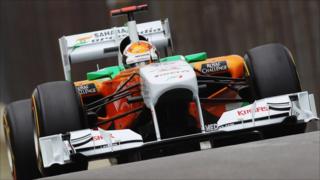 Adrian Sutil believes he has "done the maximum" to secure a return to Formula 1 with Force India for 2013, saying the decision is now up to team boss Vijay Mallya.

The German was dropped by the team for 2012 but tells BBC Radio 5 live's Jennie Gow all his problems relating to his conviction for causing grievous bodily harm have been "solved" and insists there is "no problem" for him to travel the world once again.

Sutil has previously spent five years with the Silverstone-based outfit, including their incarnation in 2007 as Spyker F1.