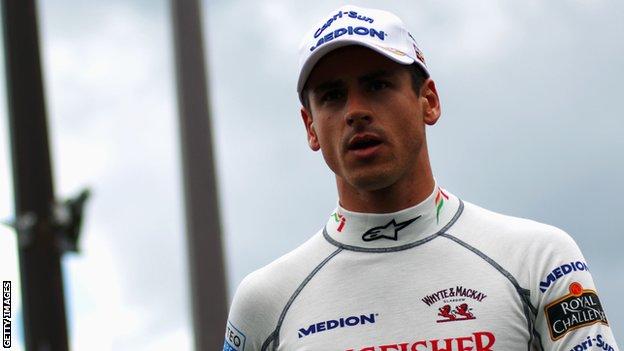 Adrian Sutil says his criminal record will not be a barrier to his return to Formula 1 next season.

The German, linked with a return to his former team Force India, was convicted in February of grievous bodily harm and handed an 18-month suspended sentence.

Some countries have restrictions on travellers with a criminal record.

But Sutil, 29, said: "We checked all the countries and there is no problem for me to travel. All my problems last winter are solved."

"I'm ready for a new beginning," added Sutil, who was replaced for the 2012 season by Nico Hulkenberg.

Force India stressed in February that their decision to let the German go was not because of the legal proceedings.

Now Sutil is among the contenders for the second drive at Force India alongside Scotland's Paul Di Resta.

Sutil, who drove for Force India in their various guises from 2007-11, said: "The signature is what counts. They know who I am and how to work with me; in the last five years we got a lot of experience.

"There's not a lot to say, it's up to [team principal] Vijay [Mallya], it's his decision. And hopefully he will make the right one so I am in the car.

"I'm quite relaxed; I know how to handle this situation, I've done the maximum I can do at the moment and now it's up to them to decide if I'm in the seat or not."

Sutil was speaking to BBC Radio 5 live reporter Jennie Gow at the Race of Champions event in Bangkok at the weekend, where he was commentating for German television.

The event was won by French F1 driver Romain Grosjean, whose Lotus team have not yet confirmed whether he is being retained alongside Kimi Raikkonen for 2013.