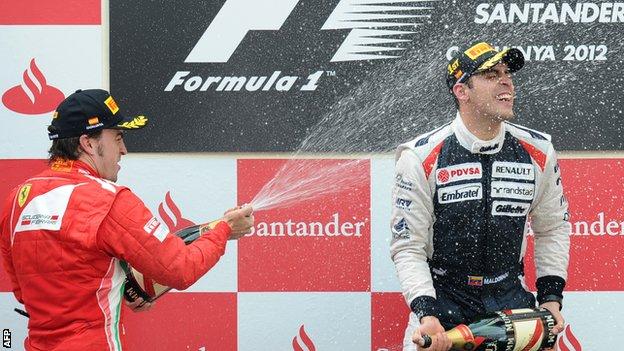 Williams have parted company with one of the men responsible for their turnaround in form this year.

Chief operations engineer Mark Gillan has left the team, who say he "wanted to spend more time with his family".

Gillan was one of three leading engineers recruited to try to stop Williams's decline in results - 2011 was the worst year in their history.

This year they won their first race for eight years when Pastor Maldonado triumphed in the Spanish Grand Prix.

They finished eighth in the constructors' championship, one place higher than they had in 2011, but their standing was affected by a series of penalties and incidents suffered by the Venezuelan.

After winning in Spain, where he beat championship runner-up Fernando Alonso of Ferrari into second place, Maldonado did not finish in the points again until the Japanese Grand Prix in October.

Maldonado qualified in the top 10 for 13 of the 20 races in 2012, and in the top six for seven races, but scored points only five times.

Gillan is no longer working at the Williams factory, but is officially on 'gardening leave' until the formal end of his employment on 31 December.