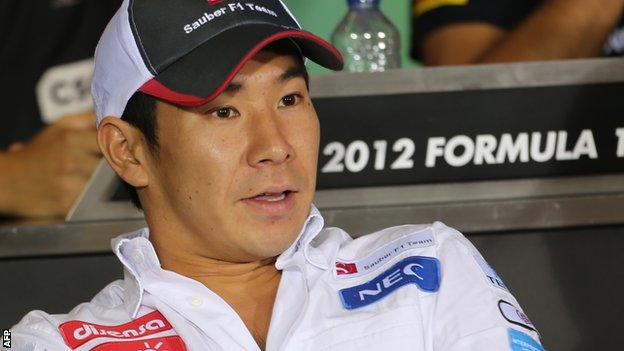 Japanese former Sauber driver Kamui Kobayashi has given up on finding a Formula 1 seat for next season.

The 26-year-old had raised around £6.5m, partly in donations from fans, to fund a drive.

He announced on Monday that he had failed to "secure a seat with a competitive team".

In a message on his website, he asked for the donations to stop and said he would "save the money for 2014" and was "confident" of securing a drive then.

Kobayashi's only realistic options to stay at a comparable level to Sauber, or make a step up, had been Lotus and Force India.

But on Monday Lotus announced they would retain Frenchman Romain Grosjean alongside Kimi Raikkonen.

Force India have not yet revealed who will partner Scot Paul di Resta but Kobayashi's announcement suggests he is out of the running.

German Adrian Sutil, who raced for Force India in their various guises from 2007-11, is considered the leading contender to partner Di Resta, with former Toro Rosso driver Jaime Alguersuari and the team's reserve driver Jules Bianchi also in the frame.

There is a seat available at backmarkers Caterham, but that is considered likely to go to Russian Vitaly Petrov, who drove for the team in 2012.

Ex-Williams driver Bruno Senna is also a contender at Caterham, where Finn Heikki Kovalainen, who has driven for the team since they started in F1 as Lotus Racing in 2010, is not expected to be retained.

Kobayashi's message thanked his fans for the donations, saying: "Since the donations started, it has become quite big news in Japan. And because of your big support, it gave huge influences to some of Japanese companies and I started receiving good support from them.

"I was in the position to bring a budget of 8m euro (£6.5m) at least. If you could imagine the time I had, it was an overwhelming reaction and it shows there still is a great potential from Japanese companies.

"Unfortunately, the time was still short and I am not able to secure the seat with a competitive F1 team for 2013. I have to admit that it is very sad and I feel sorry for fans and Japanese companies who supported me. But I am still confident to make it happen in 2014."