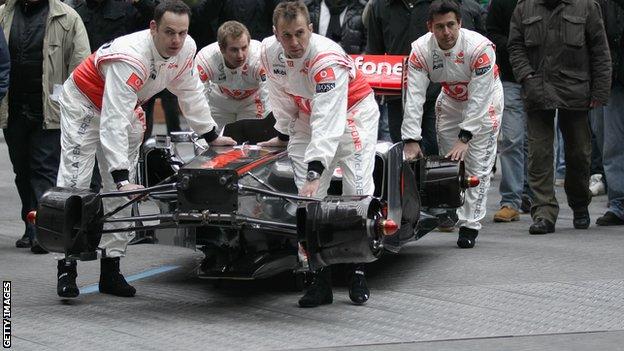 In the first of our three-part series on how a Formula 1 car comes to life, we looked at the initial conceptual design stage. This time, we look at building the basic structure of the car.

Once a team has laid out the design of the fundamental mechanical parts of the car, two things need to happen - one, the design office need to devise the most aerodynamically advantageous bodywork for it; and the car needs to be built.

We'll look at aerodynamic design in the next part of this series; for now, let's concentrate on how the car is built.

The chassis - or monocoque - has several crucial functions. It is the survival cell for the driver in the event of an accident; it is what the engine, suspension and bodywork is mounted on; it houses the fuel tank and other hardware for the car.

Monocoques are immensely complicated things. Things like the suspension mounts, nose fixings, engine mounts and so on take a tremendous amount of time to get right.

The roll-over bar test is incredibly spectacular to watch. It would frighten anyone

The chassis is basically an outer carbon-fibre skin forming the surface detail on top of aluminium honeycomb - which will vary between six and 15mm in thickness - and then a second carbon skin inside that.

Where there are suspension or engine loads, the honeycomb will be replaced with a solid machined insert. That is then all bonded together in an autoclave - a hot, high-pressure oven.

It also has to pass a series of crash tests before it is allowed to race. So a tremendous amount of effort goes into it from a stress analysis point of view, for the sake of safety, and for functionality. And the two can sometimes compromise each other a little, because you want the lightest weight for the highest torsional stiffness value of the chassis.

It's difficult to give a figure for the weight of a chassis, as they are built differently. Some teams have the roll-over bar as part of the structure; others bond it on afterwards, for example. But a ballpark figure would be about 50kg, which is incredibly light for what it does.

By the start of the year, a team needs to have three chassis ready. One for the crash tests, which take quite a lot of time, one for building up a car and a third underway.

You don't want to be short because you never know when you're going to have a problem - last year, for example, Lotus had to curtail their testing when it became apparent that the front suspension mounts were moving in the chassis.

The crash tests - or impact tests to give them their proper title - are an important part of ensuring F1 is as safe as it has become.

There are three main tests that destroy things: nose impact; roll-over bar; and side-impact. There are quite a lot more tests - around 10 in total - but they are non-destructive squeeze tests, where you're allowed a maximum deflection for a certain load, to ensure the chassis is strong enough to withstand it. Each chassis has to pass all the tests.

In the nose-impact test, the car is fired into a concrete wall at a certain speed. There is a maximum permitted G-force level in terms of deceleration and the damage to the crushable structure must stop before it gets to the survival cell. You could use two or three noses getting that done.

The nose has quite a lot of aerodynamic influence and you have to commit to that component fairly early. You have to get a version ready for the crash test but at that point in time you might not have optimised your front-wing aerodynamic package.

It's a bit of a chicken-and-egg situation. You have to do it for the crash test but you might have to change it later on - and do another crash test, because each new design needs to pass.

Some of the structure will deform, but if it deforms more than it is allowed to - which is 50mm, or there are any marks more than 100mm away from where you're applying the force - then you fail.

It's a tough test but then so it should be - it's about protecting the driver's head.

The side-impact test is there to ensure the car protects the driver if he hits anything side on, and teams pass it by attaching four tubes that stick out from the chassis. To protect the driver further, particularly in the case of being hit by the nose of another car, a panel is bonded on to the side of the chassis, sort of like a blast panel.

That was introduced after the IndyCar accident in which Alex Zanardi lost his legs in 2001. I was working in IndyCar at the time and we came up with that panel for additional side-impact protection. F1 adopted it shortly afterwards.

These crash tests apply to the fundamental parts of the car and that is what was going on at the teams leading into the Christmas period and then January.

Monocoque is a French word meaning 'single shell', which refers to the process of making an entire body out of a single piece of material

That's the thing about F1. There is no Christmas. There is no winter off. People obviously have to have holidays, but work goes on year-round.

Take Red Bull as an example. That's a 600-strong team and about 150 or so of them are directly involved in the design of the car.

They're probably the biggest team but the percentages of the total workforce involved in the design and engineering of the car are the same up and down the grid.

And those people work flat-out all the time. You're always trying to make the car better.