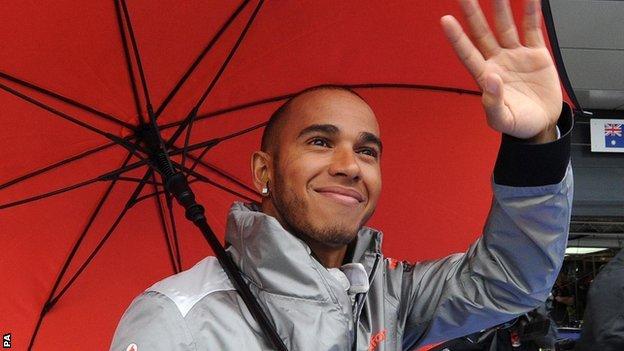 One of the reasons Lewis Hamilton chose to leave McLaren to join Mercedes for 2013 has come more clearly into focus.

Hamilton is expecting Mercedes to be in a better position than McLaren when Formula 1 introduces new engines in 2014.

One of the main reasons is that, as the official factory team, the engineers at Mercedes' Formula 1 chassis base in Brackley, Northamptonshire, are working hand-in-hand with the people designing the new 1.6-litre V6 turbo-charged engine at Brixworth a few miles up the road.

That means the Mercedes chassis designers and aerodynamicists can custom-build the engine for the purposes they believe will best suit their car. McLaren, by contrast, are now mere customers of Mercedes and have to take what they are given.

That's not to say that McLaren cannot be competitive in 2014 - think back to 2009, when the Brawn team rose out of the ashes of Honda, secured a late deal for Mercedes engines and went on to win the first race and the championship.

[The new engines will be] still loud and sweeter-sounding

But it does mean that Mercedes have a potential advantage - just as do Ferrari and Renault's de facto works team, Red Bull.

This could be very important at a time of huge change in F1 - these new regulations, which also include significant modifications to the cars, are the biggest change for decades.

The new turbo engines replace the current 2.4-litre normally aspirated V8s, and energy recovery systems will play a much bigger role in their total performance than they do now.

Just how big a change that will create becomes apparent when you start to dig into the detail of the changes to the engines.

The introduction of the rules has been controversial - none less than F1 boss Bernie Ecclestone has campaigned against the new engines.

One of his major stated objections was that the turbos would not sound as good - a concern several circuits have also expressed. Meanwhile, there is still uncertainty about the cost of the engines, a particular issue for the smaller teams.

Costs for customers remain unknown, and therefore an issue, but Ecclestone's anxiety about the spectacle can be allayed immediately.

A recording Mercedes have played to the media of one of the new turbo engines doing a lap of Monza was different from the current sound, but still just like an F1 car - strident, muscular and obviously loud.

It is impossible to accurately gauge the exact volume level of a car out on the circuit, as the engines will not run until next winter, but Mercedes engine boss Andy Cowell says the new V6s will inevitably be a little quieter than the V8s, because of the turbos, but "still loud and sweeter-sounding".

Far from reducing the spectacle of F1, in fact, the new engines should increase it in at least one important way. They will have a much broader power curve, with vastly increased torque compared to the current V8s, especially on the exit of corners.

That means the cars will have more power than grip, so they should slide more than they do now. Although that will be within the natural limits set by aerodynamics, which dictate that, for best performance, cars should not veer too far from the straight ahead.

That torque comes from the combination of the turbo-charging, and the way the much more powerful energy recovery systems will be integrated into the engines.

The recovered energy can either be stored in a battery cell as now, or used to prepare the turbo-charger for the driver demanding acceleration.

This means that the turbo can be spun up to the required speed while the car is cornering, so it is available to the driver as soon as he needs it, thus vastly reducing the amount of turbo 'lag', a traditional bugbear of such engines.

So the drivers will have virtually instant power - and much more of it than they do at the moment - as they are leaving the corners.

As a driver is not "traction-limited" - ie can use his accelerator without worrying about spinning the wheels - for an average of about 50 seconds a lap, that means he will be able to use Ers for 70% of the lap.

So it will be impossible to be competitive without Ers - and the effectiveness of the energy recovery systems will be critical to performance.

A number of restrictions have been built into the rules to keep costs under control, including a maximum limit of 125,000rpm for the turbo itself.

But the size of the single turbo is free, as is the Ers system, within the power and energy storage restrictions detailed above, as well as a series of others, including weight and location in the car.

And at the heart of the rules is energy efficiency - engines will be allowed to use no more than 100kg of fuel in a race and the engines will have a fuel-flow rate restriction of 100kg per hour.

Discussions are still ongoing as to how best to represent fuel usage to the viewing public.

F1 engineers will thus be chasing as much power as they can get from a given amount of fuel - which should translate to the public in road-car technology as a car doing more miles per gallon.

The new rules, Cowell says, have been designed "to put the motor back in motorsport". In other words, the engines will make a difference to performance.

"Improving efficiency in energy conversion," Cowell adds, "will be a first-order factor of performance. The package extracting the most performance from the fuel energy will perform best."

This, he says, is "a technology directly aligned with what road cars are doing" and the result will be a "thinking drivers' formula to get the most out of the cars and the available fuel energy".

Just what a remarkable thing F1 engineers are doing for 2014 becomes clear when the engineers mention that they have a "difficult stretch target" for the engines of 40% thermal efficiency (how much energy is produced from the fuel). Compare that with the 35% figure which would be good for a road-car diesel engine and the 30% of a current F1 engine.

The idea of the rules was to align F1 much more closely with the direction the motor industry is taking, and for those who doubt that F1 development has an effect on road cars, Mercedes have an eye-opening counter-argument.

The new SLS AMG Coupe Electric Drive is a version of Mercedes' current supercar powered only by four electric motors. It is also the most powerful car the company's performance arm AMG has ever produced.

It has 750bhp, an astonishing 1000Nm (newtonmetres) of torque (almost double that of a Ferrari 458), does 0-60mph in 3.9 seconds and has a range of 250km. A total re-charge should take between one and four hours, depending on the facilities.

That has only been possible, Mercedes say, because of the demands of F1 Kers systems pushing the limits of power density of battery cells. That lowered cooling requirements, which means more cells can be used in a given space.

The hope is that the new F1 engine formula will affect road-car development in similar ways.

As far as F1 is concerned, the Mercedes engineers and their counterparts at Ferrari and Renault are talking about building engines that produce about the same power as they do now, but with much more usable torque, providing a potentially better spectacle and using 30% less fuel.

It's not hard to see why Cowell and his team are so transparently excited about it.