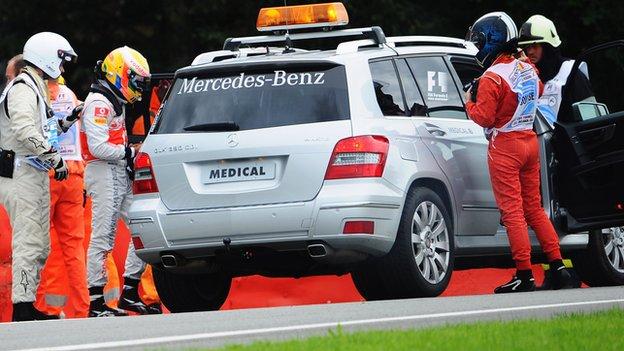 Congrats to Ian. Lots of luck and have a great time

He was previously chief medical officer for Silverstone and had responsibility for the British Grand Prix.

He added: "[He] would have been on my shortlist."

Hartstein, for reasons that remain unclear, was not granted a new contract at the end of 2012 after eight years in the role, in which he succeeded safety pioneer Prof Sid Watkins.

He had made clear his anger at losing his position on the social networking site Twitter in December, saying he "might let the world know what's really going on on the medical side of the FIA".

But on Thursday evening he posted his congratulations on his Twitter account, saying: "Congrats to Ian. Lots of luck and have a great time."

Roberts's nomination was announced on the eve of a memorial service which is being held for Prof Watkins in London on 18 January.

Watkins, who died in September aged 84, was instrumental in the huge safety improvements that took place during his active involvement in F1 from 1978-2004.

Roberts reports to the FIA's medical delegate Prof Jean-Charles Piette, who oversees emergency operations from the race control building next to the pits.