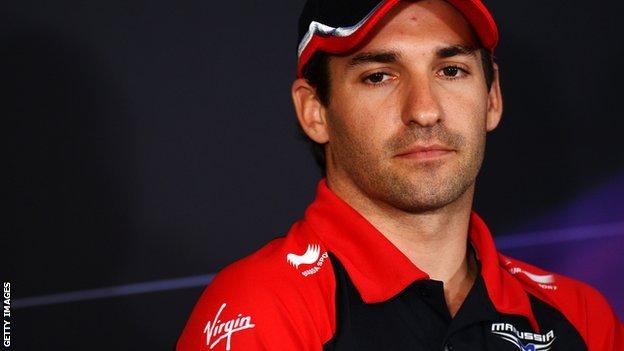 German Timo Glock will not race for Marussia this year after he and the team "agreed to part company with immediate effect".

The German, 30, has raced for Marussia since their debut in 2010 as Virgin. Team boss John Booth said "commercial" considerations were behind the move.

"In two seasons with the Japanese giant Glock's best results were second places in Hungary 2008 and Singapore in 2009.

"Toyota's departure at a late hour meant he was struggling to find a drive for 2010 and he joined Marussia hoping to help them build up into a respectable midfield team. But it has been a financial struggle and now that fight has led to the team having to let Glock go to help them survive."

"Tough economic conditions prevail and the commercial landscape is difficult for everyone," Booth added.

Marussia did not say in their statement who would be replacing Glock. They have already confirmed the English novice Max Chilton in one of the seats.

Brazilians Bruno Senna, who raced for Williams last year, and novice Luis Razia have been linked to the team.

Booth said: "Timo is a fantastic driver and he has been a very popular member of the team.

"Our team was founded on the principle of benefiting from proven experience while also providing opportunities for young emerging talent to progress to the pinnacle of motorsport.

"Thus far, this philosophy has also been reflected in our commercial model.

"The ongoing challenges facing the industry mean that we have had to take steps to secure our long-term future.

"Tough economic conditions prevail and the commercial landscape is difficult for everyone, Formula 1 teams included.

"We would like to thank Timo for working with us to reach this decision, especially as he had a valid contract, and also for the contribution he has made to our team."

Glock, who is expected to race in the German Touring Car Championship (DTM) this year, said: "I have had three excellent years with the Marussia F1 Team, during which I had the chance to actively participate in building and developing the team in its endeavours to succeed within the Formula 1 World Championship.

"I would like to wish the team good luck in navigating this next period and thank everyone for the great times we shared and the support I have received.

"Although it is not the path I expected to be taking, I am in fact very excited about what the future holds in terms of my own career and I hope to comment on that very soon."