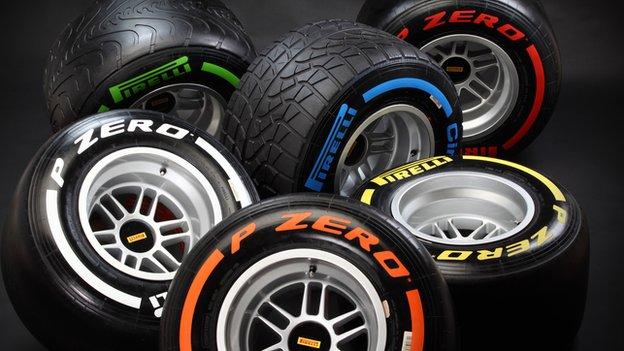 It has changed both the construction and rubber compounds of the tyres in an attempt to ensure they degrade faster.

Pirelli says this will mean at least two pit stops per race and "increasing overtaking opportunities and so helping provide an even better show".

The Italian company added that softer tyres will mean performance is improved by 0.5 seconds a lap.

Pirelli has also changed the colour-coding on the 'hard' compound tyres to make them easier to identify.

Our 2013 range of tyres mixes up the tyres once more, to help overtaking, and to ensure two to three pit stops per race

For the last two years they have been silver, which was virtually impossible to see when the cars were moving, so the paint on the sidewall and logo has been changed to orange for 2013.

"The goal is to continuously set new challenges for the drivers and to ensure all the teams start the new season on a level playing field when it comes to the tyres," said Pirelli motorsport director Paul Hembery.

"Through accumulating more information with each grand prix last year the teams eventually fully understood the tyres, after a spectacular start with seven winners in the first seven races.

"It resulted at the end of the year in races with less competition, and sometimes only one pit stop.

"This phenomenon was also observed in 2011, disappointing many fans and prompting some of the teams to ask us to continue developing our tyres further this year, in order to provide a fresh challenge with something different.

"Our 2013 range of tyres mixes up the tyres once more, to help overtaking, and to ensure two to three pit stops per race."

Hembery added Pirelli would continue to use Spaniard Jaime Alguersuari and Brazilian Lucas di Grassi as its test drivers in the 2010 Renault it used last year.

Teams were given the 2013 'hard' tyre to try out for the first time in Friday practice at the season-ending Brazilian Grand Prix.

The 2013 tyre did degrade more quickly than the 2012 one, but they say it was difficult to draw definitive conclusions as the track temperature was among the highest they had seen all year.

The last two seasons of Pirelli's involvement in F1 have followed a pattern - the early races have had more pit stops, but the number has reduced as the season develops and teams learned how to use the tyres more effectively.

Engineers say the trend towards fewer pit stops at the end of last season, when many grands prix featured only one stop for the leaders, was largely because Pirelli made overly cautious choices on the tyres they took to many of the races.

"They have the range," said one engineer from a top team, "but they need to take the right tyres. They took tyres that were too hard to the races at the end of last year."

Pirelli has to choose two compounds for each race and make the decision based on the abrasiveness of the track and the likely weather conditions. The teams have to use both types of tyre in a dry race.

Pirelli admitted they had erred on the side of caution and have said they will try to spice things up again this season.

The company also said they were "confident" they would strike a deal to continue in F1 beyond their current contract, which ends this season.

President and chief executive Marco Tronchetti Provera said: "We are obviously willing to continue this adventure.

"The teams are satisfied and the partnership we have with F1 is a successful one, a win-win co-operation.

"That is why I'm confident we will have a new agreement from next year, but there is nothing new for the time being."