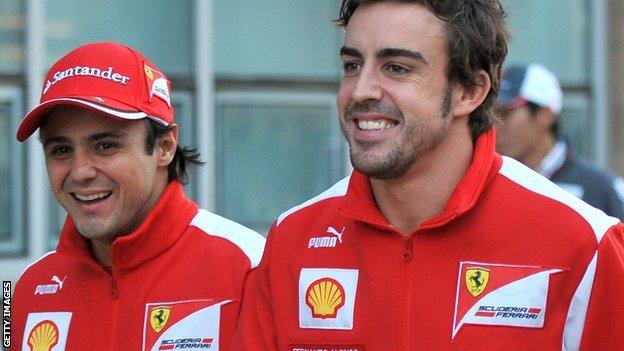 Fernando Alonso will miss the first test of Ferrari's 2013 Formula 1 car in Spain next month.

The Spaniard, who has finished second in the championship in two of his three years at Ferrari, will not drive the car until the second pre-season test.

Instead, team-mate Felipe Massa will drive for three days at the first test at Jerez, starting on 5 February.

The Brazilian, 31, will hand over to new development driver Pedro de la Rosa for the final day.

De la Rosa, 41, joined Ferrari this month. He will spend much of his time working in the team's simulator, so experience of the car on the track will be vital information for him.

Correlation between the team's simulation tools and the behaviour of the car on the track has stymied Ferrari's attempts to design and develop their car for the last three years.

Although the first test of a new car is generally spent exploring fundamentals such as whether it behaves as expected before teams move on to performance work at subsequent outings, it is still unusual for a team's lead driver not to drive the car at all at that time.

Ferrari said Alonso, 31, would be concentrating on his physical training before driving for the first three days of the second test, at Barcelona's Circuit de Catalunya from 19-22 February, and handing over to Massa for the final day.

The Circuit de Catalunya is considered a far greater test of a car's overall capabilities than Jerez and three consecutive days will give Alonso a good chance to fully understand the car.

Massa and Alonso will alternate in the car at the final test, also at the Circuit de Catalunya, from 28 February to 3 March, with Massa driving the first and third days and Alonso the second and fourth.

The new Ferrari is being unveiled at the team's Maranello base on 1 February.