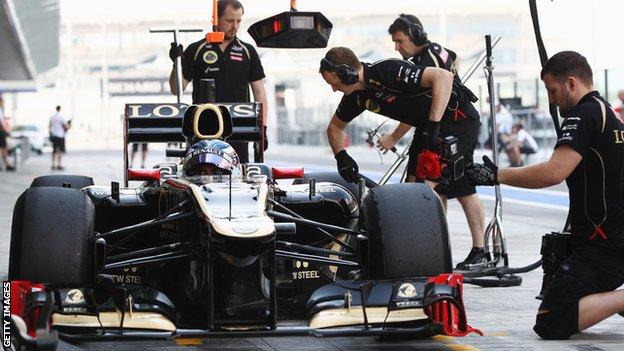 In the first four parts of our series about how to make an F1 car, we have looked at the various stages of design. This week is the final instalment - pre-season testing.

While a Formula 1 team are designing their new car, they always have to keep in mind one key detail - when it needs to be finished.

In most cases, this is the first pre-season test, which this year starts on 5 February in Jerez, Spain.

Most teams will want to have their new chassis running at that first test so they have time to properly understand the car before the season starts.

So while the basic layout of the car, the overall aerodynamic philosophy and the detailed design are being worked on, a team has to be constantly assessing when it needs to put the individual components into production in order to get the car ready in time.

That applies to the launch and the first test, but also throughout the season, as at any given moment there will always be more ideas waiting for their turn to go on the car.

Within 10 laps of the car hitting the track, a team will know whether their product is more or less what they thought it was

The car that runs at the first test will be what the team considers the best package at that time - but the specification for the car at that test will have been set some weeks previously to ensure all the parts are ready.

It depends on the size of the part, but all the major aerodynamic pieces on the car at the first test will have been signed off before Christmas, with perhaps a few small parts that take only days rather than weeks to make - such as turning vanes - after Christmas.

A team is unlikely to have a big stock of aerodynamic parts at the first test because the important ones, such as the front wing, will probably be changed by the time of the final test. So it would be a waste of money to make lots of front wings that are only going to be used for two tests.

The first test is very important - but not for the reasons you might expect.

You might think it would be the first time a team has an idea about whether the car works. But in fact the simulation tools are so good these days that, even before the first test, the team should know what to expect.

They don't wait to get to the track to start the first developments - they will already be under way through the build process of the first cars in January.

Within 10 laps of the car hitting the track, a team will know whether their product is more or less what they thought it was.

Occasionally, though, a team will get a nasty surprise - as Ferrari did last year. That's when the panic starts.

But assuming those first couple of runs go as expected, the team will start to optimise things.

They will quite likely start with what they call straight-line work - running the car at a constant speed with different ride-heights and different settings, logging a lot of data. They will correlate that data with the data they have at base to make sure the car is working as they expected.

You don't want the driver to go around a corner to find out for the first time that the rear diffuser stalls dramatically - which causes a big loss in downforce - at a certain ride-height. You want to predict it.

The team will run back-to-back tests on two different front wings of the same specification to make sure everything works consistently and as expected.

Then they will try a few different mechanical set-ups on the car - stiffer vertical springs, softer third spring or roll bars - changing combinations around the car to make sure it is working in the right window.

This can be quite complicated because it can be affected by the performance of the tyres - and last year the tyres were falling off quite dramatically.

Ideally, a team wants to be doing these sorts of tests with stable tyres to ensure they understand that the results they are getting are because the car is changing not the tyre.

Testing is also important for understanding whether the car is getting good life out of the tyres.

They need to last as long as possible but still work well on the first lap. That's a compromise - a car that is perfectly optimised for one-lap performance is likely to wear out its rear tyres over a long run.

That means the team need to be able to dial in a bit of understeer with a small reduction of front-wing angle for those long-race simulations. But too much affects the pace.

So the team will be looking at the mechanical set-up of the car to make sure it does not have too much understeer - lack of front-end grip - but does not wear out the rear tyres too quickly on a long run.

Doing that in testing can take quite a lot of time. It would certainly take much of the first test. Getting to the end of the mechanical window that car might work in might consist of 80 different runs on the track with different set-ups on the car.

A team needs to come away from the first test having gone through everything they needed to, with a good understanding that it has all been handled correctly, that the data is good, and that their reaction to that will be one that takes them forward.

It also gives them a database of how the car reacts to set-up changes. This is very important because when they get to the first race in Australia time will be very limited and this data will help them make the right decisions quickly.

If, in that first test, they have got everything done they think they needed to, that means there is more time either to rectify problems that have emerged, or to move the car forward again with new parts for the next two tests before the first race.

Out of that first test, the team will go to the second test with the best solution on the car, as if it were the first race.

If they haven't spent that first test wisely all they're doing is limiting their time. They won't understand the car, its deficits and what they might need to know to fix them.

The development direction is bent to suit the problems the car has, making the car better in areas where it has a problem, rather than making it better in an area where it doesn't.

So it's critical to be clear about what they are. And the first test is about giving yourself the maximum time to get to the first race in the best condition.