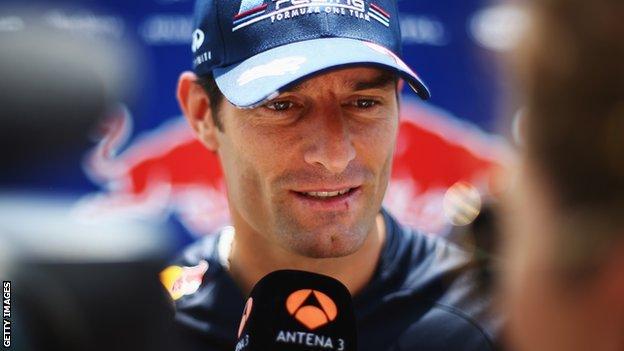 Lance Armstrong came on to my radar during the first couple of Tours de France he won back in 1999 and 2000. You watched him and thought: "Wow, this is pretty phenomenal."

I had got into road cycling when I first came to Europe in the mid-1990s and I had an appreciation of how tough those events were because I'd already done a few training camps in the French Alps that involved cycling.

So it automatically had an attraction for me and I looked up to the guys who were racing on the Tour. The whole event seemed so attractive, both visually and from a sporting point of view, and I was glued to the TV for its duration.

In 2008, Armstrong and Webber were friends and went cycling together in Monaco along with former Superbike world champion Troy Bayliss

Then I read Armstrong's book, "It's Not About The Bike". I was a young reserve driver for Benetton at the time, accompanying Jenson Button and Giancarlo Fisichella to all the races and a few months after I finished the book I went to Indianapolis for the 2001 US Grand Prix. Of course it was there that Armstrong was treated for testicular cancer.

I did my homework, caught a taxi and went out to the Indiana University Medical Centre on the Wednesday before the race.

One of my biggest heroes, and one of the biggest influences on my life, was my grandfather. The last year and a half of his life was torturous. He had the most brutal finish to his life with cancer, and that knocked me around because it knocked my dad around. I was 14.

I'm sure, as was the case for many cancer sufferers and survivors, that my grandfather would have found tremendous inspiration from the book had Armstrong's story been around 10 or so years earlier.

It was an incredible tale of how he got through the cancer as a person, a patient and an athlete.

Curiosity got the better of me. I wanted to see the people who had treated him and ask some questions about how he was, knowing full well I'd probably get as far as the reception and that would be it.

But two days later I got a phone call from Latrice Haney, the nurse who worked very closely with Lance. She's the one Armstrong describes as a real angel - it's one of the things he did get right as she was a lovely, kind-natured person.

She was super-professional throughout and said he had been very tough; he'd really fought the cancer hard.

I remained in touch with her and caught up with her and her family every time I went back to Indianapolis and took them out to the track one time.

Then, through friends of friends, I got to spend some time with Lance, did some rides with him and went to his ranch when I was in Texas after the 2004 Brazilian Grand Prix.

It was such a big thing for me at the time. I jumped into Dead Man's Hole with him and some of his mates; it's a place he describes in the book as making him feel alive after his cancer survival.

Something else that struck me was his memory; it was like an elephant's. He was across lots of other sports and he knew what was going on in F1.

He asked lots of questions about all sorts of people in the sport. I remember him asking about Frank Williams and, in particular, Michael Schumacher.

He asked about his preparations, why he was so good and how he had managed to dominate our sport for so long and so consistently. He certainly had an eye on Michael, even though F1 wasn't his sport. He was interested in the work we do in the wind tunnels and, like most people, he was interested in the cars and how they worked.

We caught up a couple more times over the next few years but we came to the end of our friendship in 2008 when he let my partner Ann and I down after we organised passes for him for the Monaco Grand Prix.

Red Bull Racing had gone out of their way to meet all his demands, which were not inconsiderable, and had everything laid on, but he failed to show without a word of an apology. I thought it was very poor form and I was disappointed.

Formula 1's governing body the FIA is signed up to a drug-testing regime which is committed to the guidelines of the World Anti-Doping Association (Wada). Drivers are tested for illegal doping practices both out of competition and at grands prix - although tests, for which competitors are selected at random, do not happen at every race and not every driver is tested when they do.

Out-of-competition tests follow the same procedure as in all other Wada-linked sports. Drivers have to make the authorities aware of their whereabouts and the testers can turn up at any time with no prior warning.

For several years now, leading drivers have been tested out of competition a few times a year.

Driving an F1 car is a highly physical activity in a hostile environment involving high G-forces, stress and high temperatures for which drivers need to be exceptionally fit. Several doping practices could potentially improve athletes' performances.

Among these would be saline infusions for pre- and post-race hydration; plasma regulators for thermoregulation and certain stimulants for alertness and reaction time.

Although muscle bulk is not a requirement - lean, fast-reacting muscles are more effective - steroids and cortisone could be helpful in accelerating muscle and bone repair in the event of an injury.

Some steroids can also promote aggression and fearlessness, which could improve performance.

Earlier in the week we had been out riding together with two of Lance's mates from Austin and former world superbike champion Troy Bayliss. One of Lance's mates had a huge shunt and was badly injured. He spent the next few days in hospital but he still managed to haul himself down to the track on race-day but Lance was a no-show.

That, coupled with the persistent rumours about Armstrong being a serial liar and a drug cheat, and long conversations I had had with the respected sports journalist Paul Kimmage (who had been on Armstrong's case for years), made me realise that perhaps he wasn't all I had hoped him to be.

At that point, probably unfairly in hindsight, I distanced myself from road cycling as a sport even though I still included cycling as part of my own training programme.

I kept asking myself how it was that everyone who beat Armstrong tested positive but he never did. It became a very heavy and difficult subject to discuss with the mutual friends we shared.

I told them two years ago that he had to come clean but they felt it was something he was unlikely to do. The word "defiant" always seemed to crop up. Armstrong was defiant all the way; he believed he was clean.

That was still evident in the interview he gave to Oprah Winfrey. He admitted he was a doper but still didn't see it as cheating.

I think what's staggering to everyone is the amount of people he was prepared to take out on the way up; people who were morally on the right side of the bridge. He wasn't worried about the ramifications and the position he may have put these people in; it was all about Planet Lance.

That's why, Lance, using your words, the "death" penalty isn't too heavy. You rubbed a lot of people's noses in it for so long and treated the rest of us like idiots.

Whenever I think of Armstrong now, I think of the clean cyclists who competed in the system Armstrong was fuelling week in, week out.

We'll never know but some of them on their day could have challenged the likes of Armstrong, Ivan Basso, Jan Ullrich, Alexander Vinokourov, Alberto Contador, Richard Virenque and so on. Sadly, we don't even know their names but in my reckoning they're morally streets ahead of those guys.

Life is full of choices. Sure, none of us are perfect, but ultimately karma always triumphs.

As some of you will know, I have been writing a column for the BBC Sport website for pretty much five years now.

I have enjoyed trying to give readers an insight into the world of an F1 driver, as well as sharing my thoughts on sport in general, but I feel it's time to put a temporary halt to it, so this will be the last column for now.

I am looking forward to doing more work with the BBC in the future but, for the time being, thanks for reading.