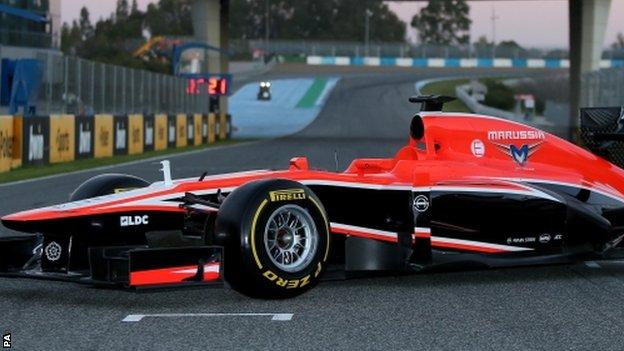 Marussia have unveiled the new Formula 1 car they hope will lift them off the back of the grid.

Unlike the rest of the existing teams, this year will be the first in which Marussia are using the Kers power-boost system that has been legal since 2011.

"There is a great deal of optimism among the team for what lies ahead," said team boss John Booth.

New English driver Max Chilton will drive the car on the first day of F1 pre-season testing at Jerez on Tuesday.

The team released German Timo Glock last month because they could not afford his salary and have not revealed the identity of their second driver. The Brazilian novice Luis Razia announced on his website last week that he had joined the team.

Marussia have tried to improve their general engineering ability for this year - the new car is the first one the new structure has built completely from scratch following the split from ex-designer Nick Wirth in 2011. I've had a good look at it, including under the skin and it is very well mechanically engineered. It's neat and tidy with lots of nice bits and pieces on it. The bodywork is very basic, without turning vanes and other parts aimed at enhancing aerodynamics, but there is room for those to be added. It looks like a solid package.

Kers provides a benefit of about 0.3 seconds a lap but Marussia, who exist on the smallest budget in F1, had chosen not to use it until now.

The team finished 11th - and last of the teams that have survived the winter following the demise of HRT - in the constructors' championship last year.

But they only narrowly missed out on beating Caterham, who snatched 10th place at the last race of the season.

Booth said: "It was said many times during 2012 that, notwithstanding the impressive steps we were taking in other areas of our development, Kers - or the lack of it - was the defining factor in determining our position relative to our immediate competitors.

"Kers was however a 'strategic omission' from our package until now; we opted to place the emphasis on aerodynamics, so that when we were in a position to bring the system to the car, we already had the strongest possible basis and its integration would be relatively straightforward."

The team described the new car as a "comprehensive evolution" of their 2012 model.