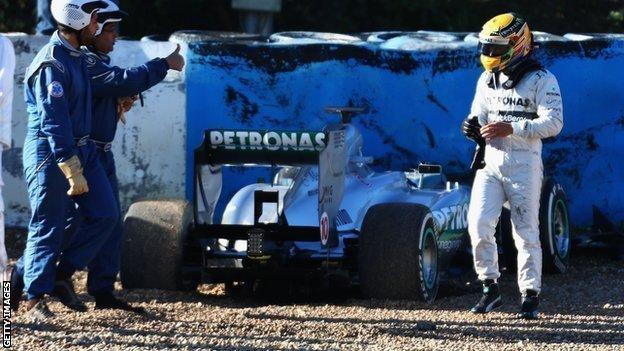 Lewis Hamilton's first day of testing for his new Mercedes team got off to a bad start when he crashed after 15 laps because of a braking problem.

The 2008 world champion lost control at the end of the back straight at the Jerez circuit in southern Spain.

Hamilton was unhurt after ploughing across a gravel trap and into a tyre wall.

The team were unable to fix the car in time to run again, continuing a troubled start to their 2013 campaign.

"I'm just glad that firstly I'm safe and that it's happened now, not when we're in the season or something," said Hamilton.

"This is what testing is about. It's about getting through those development phases, errors or whatever they may be and working on them and that's what the guys are doing."

The two problems suffered by Mercedes on their first two days of testing are not major but they have cost the team a lot of laps, which is a set-back with only 12 days of testing before the start of the season. Nico Rosberg's problem on day one was an electrical fault and Lewis Hamilton suffered a failure of a rear brake fitting on Wednesday. It seems the pipe fitting to the caliper was flexing and finally cracked. The crash also damaged one of the front suspension pick-up points. So before Thursday they will have to re-do the brakes and fix the pick-up points. In the brief running they have done so far, they haven't been slow, with the proviso we do not know the fuel loads they - or in reality anyone else - were running. So it's a set-back, but not an insurmountable one. However, they don't need too many more of them.

On the first day of testing on Tuesday, Hamilton's team-mate Nico Rosberg managed only 11 laps before his running was ended by an electrical problem in the wiring loom.

The car was pictured with flames coming from it but these were caused by unburnt fuel in the exhausts after the engine shut off as a precaution.

Mercedes said Hamilton's car lost rear brake pressure. He managed to slow the car using the front brakes but could not avoid the barrier.

The problem was traced to the hydraulic brake line connecting to the right-rear caliper. The impact with the barrier also damaged the front left corner - the suspension and associated aerodynamic parts.

Hamilton added: "We had a failure with one of the brake pipes, the hydraulic lines, so when I hit the brakes they did not work, basically. Just the front brakes worked, not the rears, so I just went straight on.

"[The impact] was pretty heavy but it wasn't as bad as I've experienced in the past.

"We damaged the car a little bit and as all the new stuff is still being built we didn't have too many spare parts to be able to change it so they're working on it tonight."

Hamilton had just set what was, at the time, the second fastest lap of the day when he crashed.

Mercedes motorsport boss Toto Wolff said the team decided to end their running for the day to ensure they had got to the bottom of the problems.

Hamilton said he was "quite happy" with the car, describing it as "a good foundation that we can work on".

However, he admitted that the car was lacking downforce compared with the McLaren he drove last year.

"That was an easy time to do, there is definitely more in it," Hamilton said. "I'm pushing the aero guys as hard as I can because we need more aero, definitely. Coming from a McLaren that was so competitive at the end of last year and had incredible downforce, I definitely notice the difference, but it is nowhere near as bad as it could be."

Hamilton, 28, signed a three-year contract with Mercedes in September having spent his entire F1 career at McLaren since his debut in 2007.

The fastest time of the day was set by Lotus driver Romain Grosjean, 0.785 seconds ahead of Scot Paul di Resta in the Force India.

Mexican Sergio Perez, Hamilton's replacement at McLaren, was seventh fastest, 0.7secs slower than team-mate Jenson Button had been in setting the pace on day one.

Perez said: "Very good day in terms of getting into the new office. It's much more different than I expected, just by sitting in a different seat. You have to adapt yourself to a different position, a different way to hold the steering wheel - everything is different but I think we are going in the right direction.

"I still need to sort out something with cockpit but we managed well.

"Feedback is good straight away. I knew this car had good potential as soon as I drove it out of the garage."

Ferrari's Felipe Massa was eighth, 1.696secs off the pace, his team saying they were concentrating on analysis of different exhaust systems.

Force India's British simulator driver James Rossiter, 29, tested for the last hour of the session for the team, clocking the 10th fastest time.