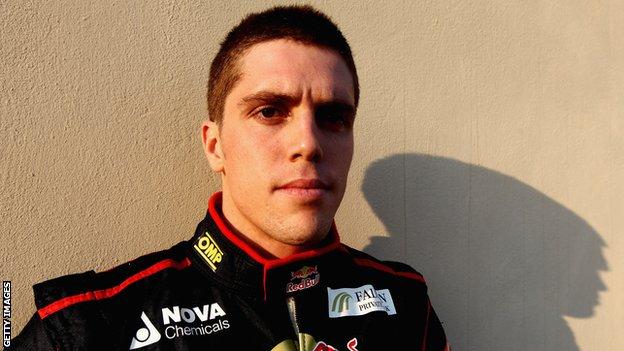 Brazilian Luiz Razia will compete in his debut season in Formula 1 for the Marussia team this year.

Razia was previously the outfit's reserve driver in their debut season in 2010 before spending two years in GP2.

Team boss John Booth said: "He is a very quick and tenacious driver. Together with Max, we are fielding a young but incredibly ambitious pairing."

Razia said: "The past two seasons in GP2 have been all about proving I have what it takes and that I'm ready.

"This coming season will be all about rewarding the faith the team have shown in me.

"This is an important year for the Marussia F1 team in terms of maintaining the momentum from a very positive 2012 season. I look forward to making a valuable contribution to that."

Marussia's announcement leaves only one vacant seat on the F1 grid for 2013 - that of Scot Paul Di Resta's team-mate at Force India.

The favourite for that is Frenchman Jules Bianchi, a member of the Ferrari driver academy, with German Adrian Sutil, who raced for the team from 2007-11, also in the frame.

Bruno Senna, who raced for Williams last year, announced on Tuesday that he would not be in F1 in 2013 and has signed to race in the World Endurance Championship with Aston Marin.