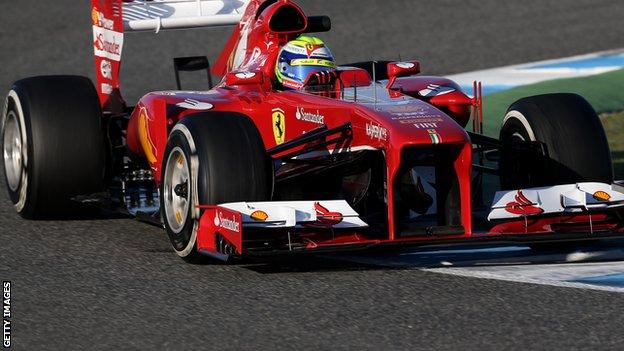 On the face of it, the fastest lap times from the first pre-season Formula 1 test last week are meaningless - the cars are not in the order you would expect and some teams who you know will not be winning races were right up at the top.

But I have been analysing the sheets of all the lap times done by the drivers and I think I have a way of producing a list that reflects pretty well the true competitive order of the new cars.

That order has some big surprises in it - the quickest cars appear to be those of McLaren, Ferrari and Mercedes, with Lotus not far behind. And Red Bull - the world champions for the last three years - look relatively slow. Let me explain how we get there.

Let's start with the list of fastest times overall from the four days of the test, which looked like this:

The problem with that list is that you do not know how much fuel the cars had on board, and fuel weight makes a big difference to lap times. So on its own, the list is worthless.

So, the next step is to look at how many laps the driver did on the run on which he set his fastest time. You know he must have at least that amount of fuel on board.

Taking Massa as an example, his fastest time was set on a six-lap run, so he must have had at least six laps' worth of fuel on board.

Each lap of fuel burnt is equivalent to a gain in performance of 0.086 seconds. Apply that calculation to Massa's time, and you get a potential lap time of 1:17.536.

A few obvious things stand out immediately. First, the Ferrari is still at the top. Second, the Mercedes looks much more competitive - that is because Rosberg's time was set at the start of a 14-lap run. Third, the Red Bulls have slipped down the table.

But this still is not the definitive list, because some of the teams try to disguise their true form in testing.

So they will do a 'low-fuel' run - the one that sets their fastest overall time - with more fuel on board than they needed to make the car look slower than it is, for example.

The ones that do it most tend to be the biggest teams. The smaller teams tend not to mess about. They want to know where they are. The big teams pretty much know they will be at the front, but they do not want their rivals to know exactly how quick they are.

But there is a way around this.

Nearly all the teams do longer runs on race-distance levels of fuel. By applying the time lost as a result of the extra fuel in the car, you can extrapolate back from the lap times they do at the start of these long runs to give another list of fastest laps.

In theory, this list should match closely to the second list, the 'potential' lap times. If it does not you know either that the car was not full of fuel when it started its 'race' run or the car had more fuel than it needed when it did its headline lap time in the first list.

Most of the times do match reasonably closely - the 'potential' and 'high-fuel adjusted' times of both Red Bulls, for example, were within 0.3secs, and the same went for Raikkonen's Lotus.

The Saubers' times were almost identical, as were those of Williams and Force India. See what I meant about the smaller teams?

Unfortunately, Massa and Rosberg did not do representative high-fuel runs, but that's not necessarily a problem - I think their fastest times were on pretty low fuel, so are probably pretty representative.

The key point is that anyone who has a quicker 'high-fuel adjusted' time than 'potential' time was almost certainly running more fuel than they needed when they did their 'headline' time.

The prime offenders here are the McLarens - but that is not a surprise, as it is well-known they rarely run low fuel in testing.

* = no lap time that constitutes a high fuel load

The interesting thing here is that, in lots of aspects, the list is what most in F1 initially suspected by the end of last week.

Button's time here is calculated from the basis of his fastest lap on day one, which Massa described as "incredible" because it was done on hard tyres, on a dirty track and on the first day of the car's life. So everyone thought the McLaren looked quick.

Likewise, the Ferrari was also obviously fast and the Lotus looked there or thereabouts - very consistent but not perhaps quite on the outright pace of the McLaren or Ferrari.

The big surprise is Red Bull, who appear to have some work to do. And the Mercedes - which is a fair bit faster than people expected, at least in Rosberg's hands.

Hamilton, meanwhile, is a long way down the list.

His times are anomalous. Unlike Rosberg, he did do a race run, and it was very slow. But perhaps that's not a surprise, as it was race pace that Mercedes struggled with in 2012.

And Hamilton's fastest single lap seemed disproportionately slow. But then it was his first proper day's running with a new team in a car with which he was not familiar, and we do not know how much fuel he had on board.

Of course, this is just one test and there is a lot of development to be done before the first race. So it would be wrong to think this will definitively predict the competitive picture in Melbourne on 16 March, let alone the destiny of the world championship.

But it certainly sets things up in an intriguing way.

Gary Anderson, BBC F1's technical analyst, is the former technical director of the Jordan, Stewart and Jaguar teams. He was talking to BBC Sport's Andrew Benson.