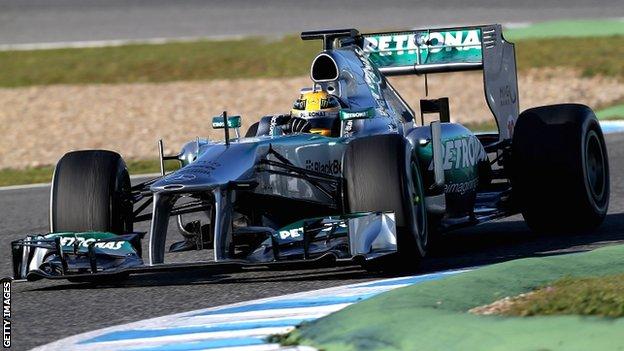 Two-time F1 champion Mika Hakkinen does not expect Lewis Hamilton to challenge for the drivers' title in 2013.

Hamilton, 28, left McLaren to join Mercedes in October but crashed on his first day of testing in Jerez this month after brake failure.

"Mercedes were not exactly up to the speed I expected them to be, so I don't see them competing too much this year."

The Mercedes drivers managed only 29 laps between them on the first two days of testing in Jerez, with Hamilton's team-mate Nico Rosberg's car succumbing to an electrical fault.

However, on the third and fourth day, the Mercedes duo then completed almost 300 trouble-free combined laps to dispel concerns about the new W04's reliability.

Hamilton, who was runner-up in 2007 and won the world title the following year, finished fourth in his final season with McLaren.

He was a distant 91 points behind champion Sebastian Vettel, who won his third successive drivers' title, with the German's Red Bull team claiming their third consecutive constructors' championship.

Lauda, in his new role as non-executive chairman of Mercedes, said: "The cars are relatively close together.

"Vettel is, in my judgment at the moment, the fastest. The car [Red Bull] works well, looks reliable.

"My joy is the Mercedes now can compete with the top three teams."