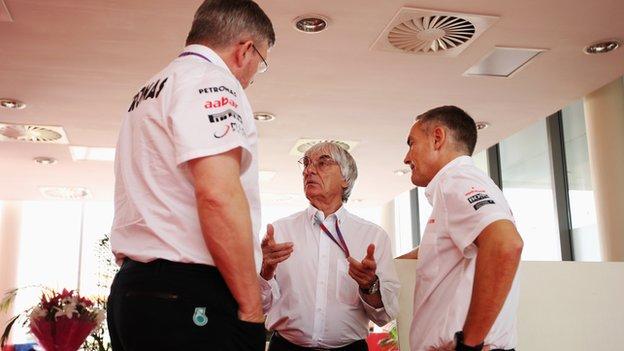 For some years now, there have been whispers in Formula 1 that all was not well financially with some of the teams.

Finally, one of the most senior figures in the sport has put a public voice to them.

McLaren boss Martin Whitmarsh says "of the 11 teams, seven of them are in survival strategy".

Whitmarsh is not just shooting from the hip. As the chairman of the Formula 1 Teams' Association, he is well-placed to know what he is talking about.

The evidence is out there, despite F1 boss Bernie Ecclestone's claim this week that teams "all have more money than God".

Spanish team HRT finally called it a day at the end of last season, after three years of limping from crisis to crisis at the back of the grid. But could others follow?

There does not appear to be an immediate danger, but signs of trouble are plain to see.

Marussia and Caterham, the two teams at the back now that HRT have gone, have chosen to replace experienced drivers who command a salary with novice 'pay-drivers' who bring much-needed sponsorship income with them.

It should also have escaped no-one's attention that the airline business of part-owner Vijay Mallya is in serious trouble, although Mallya has long insisted that the F1 team is a separate business and therefore unaffected.

Last year, there were even problems at Lotus, who finished fourth in the constructors' championship.

Between the Indian and Abu Dhabi Grands Prix, mechanics threatened to down tools in Abu Dhabi if their delayed salaries were not paid before the start of the race weekend.

The fundamental causes of the problem are both simple and complex.

Firstly, the world is still battling with the economic problems caused by the banking crisis of 2008. F1 is not immune.

It has taken this long for the issue to really hit, though, because commercial contracts have a life. It is the renewal of these contracts that has become a problem.

Even if existing sponsors do want to extend their relationship with teams, it is often now at a reduced fee. And new sponsors - or 'partners', as F1 teams prefer to call them - are noticeable by their scarcity.

As Caterham team principal Cyril Abiteboul puts it: "There's one single team that's been able to do an amazing job on the track and from the commercial perspective - Red Bull - but they have had the luxury of a shareholder that was helping at the start and no great sponsors. But I think everyone else is suffering."

"It's tough," Whitmarsh adds. "We're in the world of advertising and you only have to see how advertising is worldwide. The rate card is down. We have taken some measures but I think it's going to be tough for some of the teams to have a viable business model for a few years; there's no doubt about that."

That's the simple part. Now for the complicated bit.

Until recently, the teams collectively received 47% of the total revenues, on a sliding scale from Ferrari down to the least successful team.

Ferrari are believed to have received slightly more than $100m in 2011, with Marussia pocketing probably around a 10th of that. Marussia currently receive nothing as they do not yet have a commercial deal, although they are close to agreeing one.

Details are sketchy, but it seems that the teams secured an increase as a result of new commercial deals cut in the last few months.

But still there is resentment at how much money F1's commercial rights holder, the venture capital group CVC, is taking out of the sport.

Whitmarsh says: "Bernie has done a fantastic job for the owners. We can criticise him, but he's doing a better job than we are. He's keeping the money on behalf of his employers.

"That money whistles out of the sport and that's deeply frustrating for some of us in the sport, but that's exactly what he should be trying to do. If the teams aren't cohesive enough to work together to secure a larger share of that then they have to blame themselves."

Whitmarsh's comment concludes that he is partly responsible for the situation, adding: "I've certainly tried quite hard in that area and not been as successful as I would like to have been. Bernie's pretty good at moving the pieces around the board, isn't he?"

He certainly is. The drum Ecclestone is beating most consistently in this debate is his desire to shelve the new engines being prepared for 2014 - 1.6-litre V6 turbos with extensive energy storage to replace the current 2.4-litre V8s.

Engine manufacturers Mercedes, Ferrari and Renault have spent tens of millions of pounds designing and preparing these engines, but, at two recent meetings with teams, Ecclestone was still pushing the idea of delaying them, if not ditching them altogether, as he has been since the idea was first agreed just over two years ago.

His reasoning? Cost. The manufacturers have still not made it clear how much they will charge for customer versions and the smaller teams are worried they will not be able to afford them. F1 works perfectly well as it is, Ecclestone argues. Why complicate things with expensive new engines?

But proponents of the new engines argue that Ecclestone is missing a wider point. They say that the current V8s are out of step with the modern automotive world and that embracing efficiency, as the new formula in 2014 does, is the only way for F1 to shed its image of profligacy and to stay relevant, thereby becoming more attractive to new investors.

"If I was facing the board of Hyundai or Toyota and saying, 'Come to F1 (as an engine supplier)', they'd say, 'What are the rules?' And I'd say, 'Well, they're published like this'. And they'd say, 'I read yesterday we're not going to do these V6s'.

"We've created an unstable environment and we're very good at that because we like arguing publicly and debating these things in an unhelpful way.

"Manufacturers need to see it happen now. Even in the last few weeks, people have been saying, 'Oh, should we really go V6 next year?'.

"Christ, we're committed to it. Good, bad or indifferent, we've got to do it now. We've been saying it for long enough, we've delayed it long enough.

"If I was on the board of a big OEM (original equipment manufacturer who was considering entering F1), I'd be saying, 'Let's wait a couple of years and see whether F1 actually does what it says it's going to do for a change'."

The problem is that, because of their financial problems, not all teams take such a long-term view.

"The majority of the teams are in survival mode," Whitmarsh says. "So having longer-term strategic discussions, they glaze over. (They are more concerned about), 'How are we going to pay our freight bill to Australia?'."

So how bad is it?

A sports marketing expert with knowledge of F1, who did not want to be named, said: "I am not sure if seven teams are at risk but I guess at least half a dozen are likely to be not self-sufficient under the current structure.

"The business environment is tough everywhere, not just in F1.

"Looking at F1, the acid test should be: Is the team sustainable without support from a shareholder, who are often also sponsors?

"If the answer is 'yes', then business is healthy. If not, then teams will still probably survive but not because they are self-sufficient; only because the owners keep them going.

"If costs were reduced then all teams should be sustainable.

"F1 should aim for a structure that achieves that for the good of the sport, the competition and ultimately the fans."