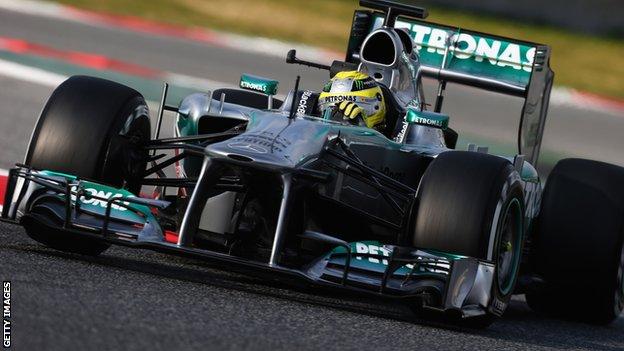 The German was just 0.007 seconds faster than Lotus's Kimi Raikkonen.

Pastor Maldonado's Williams was fifth fastest on its first day of testing, but more than a second off the pace.

"I am very pleased with how the day went lap-time wise," said Rosberg.

"We are making progress and it is going in the right direction."

The top four all set their fastest times on the 'medium' tyre, whereas Maldonado was on the 'soft', which is theoretically faster over one lap.

Lap times in testing are rarely accurate indications of form as teams do not reveal the specification in which they were running their cars.

Even times set on the same type of tyre are not necessarily comparable as the fuel loads drivers were using were not made public and these can make a huge difference to lap times.

Williams unveiled their new car on Tuesday morning, having decided to run a 2012 car at the first test two weeks ago, and were soon hit with some bad news.

Governing body the FIA told them that a controversial exhaust design they had devised was illegal, which means they will have to change it before the first race or risk being disqualified.

The Caterham team, who have a different but equally controversial exhaust, have been told the same thing.

The test got off to a slow start, with McLaren's Sergio Perez, for example, completing only two laps in the first two hours.

But as the temperatures warmed up, the drivers began to get down to work from about 1000 GMT.

Perez, Lewis Hamilton's replacement at McLaren, was the first driver in a top team to set a fast time, but his lap was soon eclipsed first by Alonso and then by Di Resta.

Vettel then set a benchmark of one minute 24.039 seconds on the 'medium' tyres before Raikkonen used the 'hards' to set his fastest lap.

Alonso almost matched the Finn before Vettel set his second benchmark, and the morning's fastest lap, of 1:23.046.

Vettel lowered his time again shortly after lunch and held sway at the top for most of the afternoon before a late flurry of times from Rosberg, Raikkonen and Alonso.

Rosberg was fastest after the first two hours of the day but ended the morning eighth, 1.474secs off the pace.

The German is sharing the car this week with new team-mate Hamilton, alternating from day to day throughout the four-day test.

Rosberg lost at least two hours' running when the team had to fix a gearbox problem, but recovered to have a productive afternoon, culminating in the fastest time of 1:22.616.

He added: "I didn't get many laps in which is a bit of a pity, for sure. We have to work on that and get more laps in - there are a bit too many reliability issues at the moment.

"Other than that it is going in the right direction and the car feels decent. It feels better than the last time we were here."

Perez ended the day seventh fastest, behind the Toro Rosso of Daniel Ricciardo.

Much of the attention this week will be on Alonso, who is driving the first three days of this test for his first experience of the new Ferrari.

Last year's world championship runner-up decided to skip the first test two weeks ago to concentrate on his physical and mental preparation for the new season, which starts in Australia on 17 March.

"The feeling in the car was OK, more or less as expected," said Alonso.

"It's a continuation of the Brazil car [from the end of last season], let's say, more or less the same feeling.

"I have the same seat, the same pedals, the same everything so when you jump in the car it should be more or less the same as Brazil, so this is at least something good, not like last year when we drove for the first time we were a little bit surprised on the bad side.