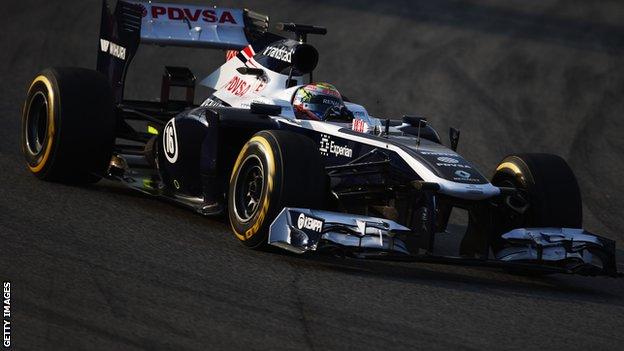 Williams and Caterham have been told by Formula 1's governing body, the FIA, that it considers the exhaust designs on their cars to be illegal.

The two teams have added extra bodywork rear of the exhaust to help enhance the way the gases work for aerodynamic effect, a key F1 technology.

But the FIA has told both teams it believes the designs contravene the rules governing bodywork in that area.

"As with many areas of the Formula 1 rules, those governing exhausts are, to a degree, open to interpretation.

"The rule in question is article 5.8.4 of the technical regulations but there are also a series of 'clarifications' to teams from the FIA - which are not published - which constitute part of the rules.

"The key point here, according to the FIA, is that the sides of the channel down which the exhausts can run may not converge - ie the sides of the U-shape have to be either vertical or slope outwards.

"Both the Williams and Caterham designs are in clear contravention of this - Williams's because the sides form almost a complete circle separated only by a small slot; and Caterham's because there is a piece of bodywork across the whole channel.

"The FIA believes that if the sides of the tunnel begin to converge then the bodywork is stepping over the line which separates an exhaust with an incidental aerodynamic effect from one where the primary purpose is to affect the aerodynamic performance of the car.

"As ever, though, that line is grey - every single car on the grid has an exhaust outlet design that is designed to affect the aerodynamics.

"It is the FIA's very difficult job to decide which ones lie on the right side of the line of acceptability and which ones do not."

Williams and Caterham both say they are evaluating the situation.

A Williams spokeswoman said: "The team spoke with the FIA this morning which is when they gave us their view.

"The team are now seeking further clarification on this and a decision as to whether this design will be carried forward will be made before the first race."

A Caterham spokesman added: "We are continuing to evaluate a range of options at the pre-season tests as per our normal program."

The controversy surrounds the area of the car rear of the exhaust exits, which is strictly controlled in an attempt to reduce the teams' ability to harness exhaust gases to increase aerodynamic downforce.

Lotus technical director James Allison said two weeks ago that he did not expect Caterham's design to survive until the first race.

The rules dictate that exhaust gases may not be redirected. But all teams are doing so to some extent, placing open-topped channels after the exhaust exits that are designed to control the gases through something called the Coanda Effect, which dictates that gases travelling along a surface will tend to stay attached to it.

The issue with the Caterham and Williams is that they have taken differing approaches to trying to direct the gases more extensively.

Caterham have placed a small 'turning vane' (aerodynamically shaped piece of bodywork) in the channel, while Williams have almost totally enclosed the channel at one point, leaving just a tiny slot at the top.

Williams technical director Mike Coughlan initially told the media at the launch of the team's new car on Tuesday that he believed Caterham's design was "clearly not allowed" whereas his own team's design was.

Williams have now been forced to reassess the situation following the intervention by the FIA.

The governing body's stance means that the teams would risk being disqualified if they ran their cars in that specification at the first race in Melbourne, Australia on 15-17 March.

But the teams can continue to run them in testing because it does not count towards the world championship.