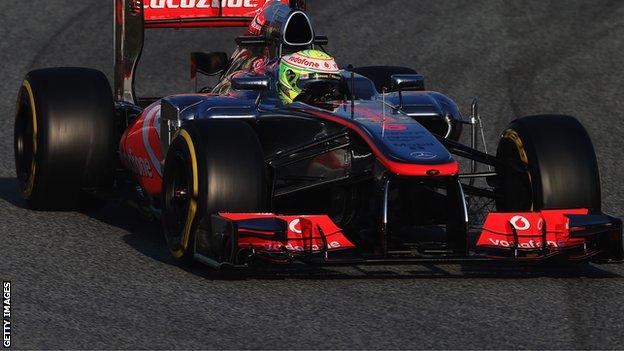 The Mexican was 0.349 seconds quicker than the world champion, with Lotus driver Kimi Raikkonen, who lost the morning to a gearbox problem, third.

Mercedes' Lewis Hamilton, whose seat Perez has taken, was fourth fastest ahead of Ferrari's Fernando Alonso.

Lap times in testing are rarely accurate indications of form as teams do not reveal the specification in which they were running their cars.

Even times set on the same type of tyre are not necessarily comparable as the fuel loads drivers were using were not made public and these can make a huge difference to lap times.

Perez and Vettel set their times on the 'soft' tyres, which are fast over one lap but 'go off' quickly.

"The degradation of the tyres is very difficult. It is a big surprise," said Perez.

Perez added: "The summary is positive. It has been a very important day for us because we managed a lot of mileage and we managed to complete all our programmes. There is still work to do before Melbourne and we have to maximise every chance we have to make this car better for then.

Raikkonen's time, which was 0.849secs off the pace, was on mediums, which are said by tyre supplier Pirelli to be about 0.8secs slower than the 'softs'.

Hamilton, 0.029secs slower than Raikkonen, set his fastest time on the 'hard' tyre, while Alonso was on the 'medium' tyre. The Spaniard was 1.399secs off Perez's pace.

Hamilton spent his morning comparing the car with and without its new 'Coanda' exhaust, a way of using the exhaust gases to increase downforce. Mercedes are trying to catch up with leading rivals Red Bull, McLaren and Ferrari, who all used the technology throughout last season.

Vettel tried to do a race simulation run in the afternoon but the German had to stop for 45 minutes in the middle of the run with a reliability problem and then stopped for a second time on the track after a pit stop.

He managed to get out on to the track again for the final 13 minutes of the day but his running was cut short five minutes before the scheduled end when English rookie Max Chilton's Marussia stopped out on track.

"We had some issues with reliability and couldn't do as many laps as we wanted, but it is better that these thing happen today than in Australia," said Vettel.

"It was nothing dramatic, just small things.

"But the feeling is good, the balance is good and the car feels right, we had some issues with reliability which we need to fix and then we can hopefully go racing in Australia. I am pretty happy."

Vettel completed slightly more than half of a 66-lap race distance at the Circuit de Catalunya near Barcelona.

All teams try to stop rivals from getting a close look at their new cars, but Red Bull are taking particularly extreme measures.

The world champions are quick to erect barriers when their car comes into the pits, with Sebastian Vettel pulling into a small alley parallel to the garage door.

Alonso also suffered reliability problems. He lost time while the Ferrari mechanics changed the car's rear bodywork, which had been overheated and damaged by the exhausts.

All 11 teams are in Spain for a four-day test finishing on Friday.

All the teams try to some extent to stop rivals getting a good look at their new cars in testing but Red Bull, the world champions, are taking that to extremes this winter as their drivers pull into the pits.

Standard practice is for the driver to swing the car out to face the pit wall so the mechanics can then push it backwards into the garage.

But in Barcelona Vettel has been pulling in parallel to the garage door, into an alley barely wider than the car, with mechanics on either side holding a string of three barriers on wheels to shield the car.

They then bring the barriers in even closer to the car while other mechanics jack the car up, put it on trolleys, swivel it around and back it into the garage, while the mechanics bring the screens in behind it.