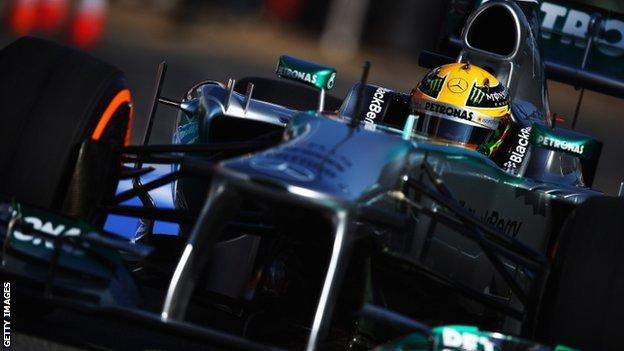 Mercedes driver Lewis Hamilton set an impressive pace on a damp final day of the second pre-season test at the Circuit de Catalunya.

Hamilton was 0.351 seconds faster than second-placed Jenson Button, his former McLaren team-mate, in a brief period of dry running in Barcelona.

Bianchi is one of two hopefuls for the final available seat at Force India.

The other is German Adrian Sutil, who impressed on Thursday in his first run in an F1 car for 16 months, lapping one second off the fastest time set this week.

The day started off damp, and the drivers initially went out on to the track on 'intermediate' tyres, but the threatened rain did not materialise and by mid-morning drivers were able to start lapping on 'slick' dry-weather tyres.

The lap times quickly tumbled. Button set a one minute 27.679 seconds lap and lopped more than two seconds off it the next time around before Hamilton toppled him with an impressive 1:23.282.

Button then closed in on Hamilton with a 1:23.633 a few minutes later. Both were using medium tyres.

Hamilton said he did not think Mercedes were in a position where they would be able to compete for wins at the start of the season next month.

But he added: "It's gone pretty well. Today with it raining it is not the best in terms of trying to get the mileage, but in the dry we have got through a lot of the programmes we are trying to get through. I'm quite happy."

Hamilton's time was set at the start of a multi-lap run on the 'medium' tyres, which Button had also been using. Hamilton's times dropped off dramatically as he continued - within three laps of his fastest time he was more than four seconds slower.

The rain returned towards the end of the morning session and it even hailed over the lunch break, and with intermittent rain the track was too wet in the afternoon for any further improvements.

Red Bull's Mark Webber, who has raced in F1 since 2002, said: "I can't remember a whole day as cold as this at testing.

"In general, it was unusual conditions but I was so happy with what we got done. A lot of housekeeping - pit stops, checking lots of things that are important on race weekends as a team. The guys did such a good job.

"We're in a good position to go and challenge for strong results in Melbourne."

There are only four days of testing remaining before the start of the season in Melbourne, Australia on 15-17 March.

The teams reconvene in Barcelona on Thursday next week, when most are expected to have on their cars the performance upgrades with which they will start the season.