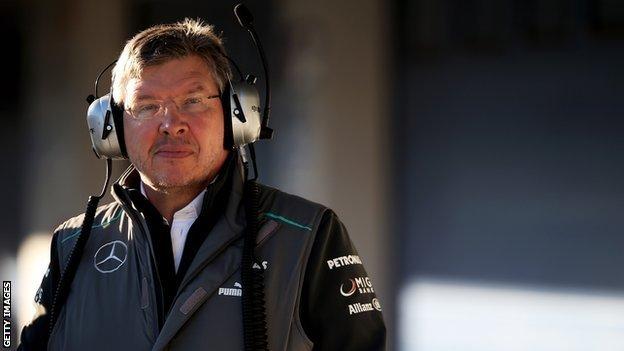 Ross Brawn is expected to leave his position as team principal of Mercedes following their recruitment of McLaren technical director Paddy Lowe.

Lowe is to run the team along with new Mercedes sports boss Toto Wolff from 2014 but he will be employed by McLaren until then on 'gardening leave'.

Brawn will stay on for now, but sources close to Mercedes say he will not continue in the long term.

"Paddy Lowe's 'gardening leave' means he will not be allowed to do any work for his new employers. But these things are notoriously difficult to police.

"F1 insiders will recall, for example, what happened when Adrian Newey, now Red Bull's design chief, left Williams at the end of 1996.

"He was on 'gardening leave' until joining McLaren in September 1997.

"Yet at the first race Newey attended as McLaren technical director, a front wing that was almost a carbon copy of that on the Williams was fitted to the McLaren.

"No-one knows for sure how that happened, but it's fair to say those at Williams at the time - including Geoff Willis, now in a senior role at Mercedes - have their suspicions.

"Either way, Lowe's ability to affect Mercedes' 2014 car will be limited and it is important to emphasise that he is not joining as technical director, but to run the team on a day-to-day basis.

"Some will see his departure as weakening McLaren, but the big impact will be at Mercedes. It is exceptionally hard to see how there can be room in that team for Lowe in his new role and Ross Brawn in his current one.

"Mercedes' new F1 leadership of Niki Lauda and Toto Wolff have certainly made an impact with their first two big decisions - signing Lewis Hamilton and taking on Lowe while, one assumes, eventually moving Brawn aside.

"How it all pans out will be watched with interest."

Mercedes GP non-executive chairman Niki Lauda said: "I cannot officially say anything because nothing has happened yet.

"If Paddy Lowe is coming or not, I cannot tell you now. Make up your own [mind], whatever you want to do.

"The situation is as it is. McLaren have put him [Lowe] on gardening leave, so let's wait and see.

"To be clear, Ross has not even been discussed, which is an important thing.

BBC Sport first reported in January that Mercedes wanted Lowe to join them.

He will fulfil a role senior to technical director, running the sporting and technical aspects of the team, while Wolff fulfils other senior responsibilities, such as political and commercial.

That set-up would appear to leave no room for Brawn in his current role - and a source close to Mercedes says he "won't stay" as team principal. Chief executive officer Nick Fry is also expected to leave his position.

Brawn said last month in the wake of BBC Sport's revelation: "Paddy is not coming. I want to see how things go before I make a final long-term commitment.

"If I choose to leave the team then Paddy will come. We've got a plan. We have a fall-back plan. It's as simple as that."

In an interview with the official Formula 1 website on Monday, Brawn said: "I am responsible for the sporting side; running the team on an operational level. If we can maintain that then there will not be a problem."

Lowe's arrival at Mercedes, which has been put in place by Wolff and Lauda, also raises questions about the senior engineering team at Mercedes.

BBC Sport understands that Wolff and Lauda are analysing the current structure and will make changes if they perceive there to be any weak links.

Lowe's move means he will join forces again with Lewis Hamilton, who left McLaren at the end of last season to join Mercedes.

It is the first sign of the ruthlessness with which Mercedes are pursuing success in F1. Earlier this month, Wolff made it clear he would do whatever it took to win the championship and emphasised that failure was not an option.

Brawn is the man behind all seven of Michael Schumacher's world titles with Benetton and Ferrari but he has been less successful in his current position.

The team won the drivers' and constructors' championships with Jenson Button in 2009 under Brawn's name, but that was partly because of the unique circumstances of the controversial "double diffuser" technical advantage and the huge financial input of former owners Honda before they pulled out at the end of 2008.

They have won only one race since Mercedes took them over for the 2010 season.

In a statement released on Monday McLaren's team principal Martin Whitmarsh said of Goss's appointment: "I'd like to offer my congratulations to Tim on his new position, which, after more than 20 years of exceptional service for McLaren, he richly deserves."

On Lowe's departure, Whitmarsh added: "Paddy [Lowe] will be performing a different role within McLaren until the end of the year. He's been a good and successful F1 technical director, and we wish him well when he embarks on a fresh challenge in 2014."