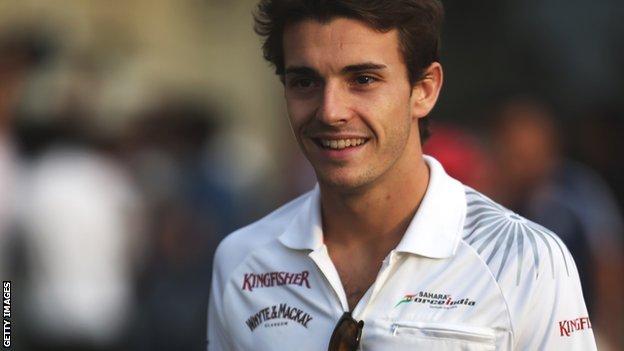 Marussia have signed Frenchman Jules Bianchi to race for them this season after terminating the contract of Luiz Razia.

Brazilian Razia is understood to have been dropped after sponsorship problems - the team appointed him because they needed a driver to provide funding.

Bianchi, 23, is a member of the Ferrari driver academy and his deal may lead to the team using Ferrari engines in 2014.

Did you know? Jules Bianchi is the nephew of Lucien Bianchi, who won Le Mans in 1968.

Bianchi had lost out on the final Force India seat to German Adrian Sutil.

Bianchi, who was Force India's reserve driver throughout 2012, will drive for Marussia for one-and-a-half of the final two days of the last pre-season test in Barcelona this weekend.

"Jules is a proven talent who is highly regarded within the paddock," said Marussia team boss John Booth.

"He has been on a clear trajectory towards Formula 1 and has achieved some impressive performances through the various feeder formulae. His obvious pedigree put him on the radar for a number of teams over the winter as a driver ready to step up to Formula 1.

"We have found ourselves in a situation where we have had to terminate our contract with Luiz Razia.

"Having made clear the basis on which we must operate in 2013, and given the steps we had taken to put that new structure in place, we had no alternative but to remain true to the principles which we had identified as being key to securing our long-term future."

Marussia were forced to release their experienced German driver Timo Glock from his contract earlier this year because of their need to generate extra revenue.

Bianchi, who will partner English novice Max Chilton at Marussia, said he was "thrilled" to earn a race drive.

"Racing in Formula 1 this season has been my goal over the winter and after evaluating a number of options I am very excited to have this opportunity to demonstrate that I am ready for this next step in my racing career," he said.