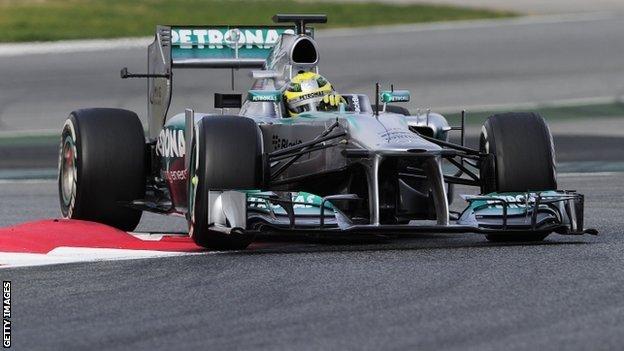 Mercedes driver Nico Rosberg set the fastest time of the winter on the last day of the final pre-season test.

The German followed up team-mate Lewis Hamilton's impressive performance on Saturday by lopping more than 0.4 seconds off the Englishman's time.

McLaren's Jenson Button was third ahead of Sauber's Nico Hulkenberg.

What we can say is that we have definitely made progress

The four pace-setting times were all set on a fascinating morning that saw Rosberg and Alonso trading places at the top of the time sheets until Rosberg settled the issue with a one minute 20.130 second lap.

Rosberg said: "As we all know you need to be very careful with testing because we don't know what everyone is doing and we know for a fact that our competitors have not shown their potential, for sure.

"What we can say is that we have definitely made progress. I'm pleased with the way the winter has gone. So 'pleased' is probably the best word, but we need to wait and see."

Of the front-runners, only Lotus's Kimi Raikkonen improved in the afternoon - he had missed all but a few minutes of the morning session while the team fixed a gearbox problem.

"The winter could have been better for us and we had some more difficulties today but hopefully we will be up there at the first race," said Raikkonen.

"The reliability has not been the best but the issues we have had have been quite minor."

Hamilton's pace - and his 0.708secs margin over the rest of the field on the day - underlined the age-old problem with pre-season testing. Namely, what do the times mean?

After all, if you look down the list of fastest times from the two Barcelona tests in this feature, it clearly is not an accurate reflection of what the grid will be in Melbourne on the 16th.

Vettel said: "We didn't manage to tick all the boxes we would like to and the last two days maybe weren't as good as we expected. There is a bit of time left and then we see when the season starts.

"It is extremely difficult to pinpoint the exact area (of the car that needs to improve) because the tyres are not consistent enough. The last two days the track and weather were better but the tyres were still poor. You get one lap and then they go off. We need to look through the data to understand a little bit more.

"We never had a winter that was less conclusive than this one. It is impossible to read the pace of the car and then to make us the favourites is not easy."

"I think it's going to be pretty mixed-up and I wouldn't like to predict where we're going to be," said Ferrari technical director Pat Fry.

McLaren's pace is harder to judge but like the other top teams they have shown strong form at various times during the winter and it is impossible to be sure who will be leading the way come qualifying in Melbourne on 16 March.