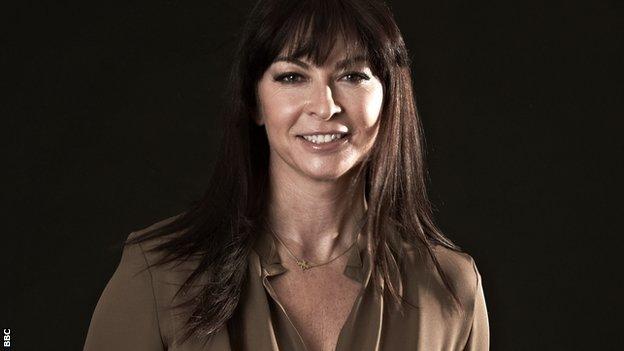 New BBC Formula 1 presenter Suzi Perry has answered your questions - giving her thoughts on everything from who might take the driver's title, to her heroes from the sport...and Eddie Jordan's shirts.

F1 returns for the first race of the season in Australia on 17 March.

We asked for your questions through Twitter, and put the best 10 to Suzi. Here are her answers:

Which driver has the best chance of winning this year's World Championship?

Sebastian Vettel, purely on what he has done in the previous three years, which is incredible. To be the youngest driver to win three consecutive championships is awesome. He's definitely the man to beat and for that reason I would say he has got the best chance. It's also hard to think that Red Bull won't win the constructors' championship this year.

From testing, which driver will be the one to keep an eye on?

We've got some interesting stories this year, starting with the headline-maker over the winter - Lewis Hamilton moving to Mercedes. The car looks good - a lot better than it did last year - and it's a good pairing with Nico Rosberg, so they could be the ones to watch. Being British it will also be exciting watching Max Chilton with Marussia. Hopefully he'll get some good experience and the fact he's got Jules Bianchi as his team-mate is good because I think Jules will pull him forward. So it will be all eyes on the Britons, but there's also Valtteri Bottas at Williams - he's kind of steely and there's something about him, so let's see how he gets on this year.

Which three races are you most looking forward to?

I'm a big fan of real racing circuits, particularly those steeped in history, so I'm very excited about going to Spa in Belgium. I've actually never been there before, but it's such an iconic track on the racing calendar. Monza in Italy has always been one of my favourites - it's super fast and you see some great racing there. And of course there's Silverstone. I've been there so many times as a fan to watch Formula 1 and also with the bikes. But it's more a track for the cars, so to be standing there in the pit lane will be phenomenally exciting.

Live grands prix on BBC One

* Venue yet to be confirmed by Formula One Management

* Television schedules are subject to change

Has there been any one moment over the winter that's made you realise just how cool and huge your new job is?

Not one particular moment, more a succession of them! I knew how cool it was when I got a call asking me if I'd like to come back to BBC Sport and offering me the job. I felt I had the best job in the world when I was covering MotoGP, so I know I'm very lucky to be in this position. I've been working non-stop since I got the news but when I arrive in Melbourne, the lights go out and they roar off the grid, that will definitely be a moment of realisation. I can't wait!

Have you had the opportunity to drive an F1 car yet. Would you be up for it?

No, but if someone offered me the chance then I would love to do it, though you can't just jump into a Formula 1 car and drive it - they're a particular beast. But I have been around Silverstone and Monza on a motorbike, which was such a thrill.

Which three motor-racing icons would you invite to a "Come Dine With Me" special?

Ayrton Senna because he's the greatest racing driver we've ever seen - every single time he got into a car he was fantastic. Valentino Rossi because he's the best bike rider there has ever been and I know him - he's a laugh and has amazing stories. And if we're talking motor racing icons I'd choose former commentator Murray Walker, because nobody has more stories than Murray!

What are your thoughts on women in F1, both in testing and potentially as competitors?

There are some great women driving cars - Susie Wolff is testing for Williams and Danica Patrick, who drives in the States, is wonderful. There are more coming through - it's slow but it's starting to happen. I think women are physically capable of doing it and certainly mentally strong enough. It's down to numbers because there are so many more boys who get into karting at a young age. But it will happen.

Have you got a childhood F1 hero or memory?

So many! It was always on the TV in our house at the weekend and my earliest memory is James Hunt winning the drivers' title in 1976. But the stand-out image when I think of Formula 1 is from 1991 and involves two of my favourite drivers - Ayrton Senna and Nigel Mansell - at Silverstone. After Nigel won, Senna stopped and Nigel slowed down so Senna could climb on his car. To see him perched on the side of the car was wonderful, plus Murray and James were commentating so it involved four of my favourite F1 icons.

Both - I can't choose between the two sports. I'm a massive bike fan and I'm hugely excited about this season with Rossi going back to Yamaha and I'll be watching every single race like always, but I love Formula 1. I don't feel like you have to choose between the two - I just love to see exciting, close racing.

Has anybody warned you about Eddie Jordan's shirts?

People warn me about Eddie every day - not just his shirts! Lots of people have said "how are you going to control Eddie?" The answer is I'm not. I like what Eddie does, I love what Eddie brings to the BBC. His knowledge is superb and with him and David Coulthard on my other side, I feel like I've got two fantastic wingmen.