The team line-ups are complete, winter testing is done and the cars are all tuned up and ready to go - the sound of revving engines will once again dominate the Melbourne air as the 2013 Formula 1 season begins in earnest this week.

Can Sebastian Vettel win a fourth successive title? How will Lewis Hamilton fare at new team Mercedes? Are any of the rookie drivers capable of springing a surprise? Answers to those questions will all become clearer over the course of the coming campaign, which gets under way at Albert Park.

"There could hardly be a better place to start a new season; virtually everyone agrees on that. Melbourne might be a long way away from F1's European heartland, but then that is increasingly the case for most of the places the sport visits. The paddock helps - tables are laid out on lawns behind the pits and everywhere is imbued with that laid-back Aussie vibe. Melbourne is a fun, relaxed, culturally rich city. And the Albert Park track, racing through parkland around a lake with the downtown skyline as a backdrop, produces just the right blend of drama and action. It's not that easy to overtake but somehow the racing is good anyway. What's not to like?"

It is a popular circuit among drivers, but more for the atmosphere than the difficulty of the track itself. Albert Park is fast, but not overly challenging while overtaking opportunities are rare due to the few proper straights. The 5.303km Albert Park circuit is not used outside of the Australian Grand Prix, meaning it is extremely slippery on Friday in particular, before grip levels improve over the course of the weekend.

Turn Three often proves to be the trickiest for drivers, with the tight right hander coming after a long straight, meaning late breaking can result in a car ending up in the gravel bed. Good driving on this corner, though, can open up probably the best chances to overtake.

With the Melbourne cityscape as its backdrop, this palm tree-lined street circuit, which circles the man-made Albert Park lake is a popular venue for fans and drivers alike.

As it's the start to the Formula 1 season, and given its glamorous location, the Australian Grand Prix is a popular destination for celebrities, and the paddock on race day is often filled with numerous famous faces. 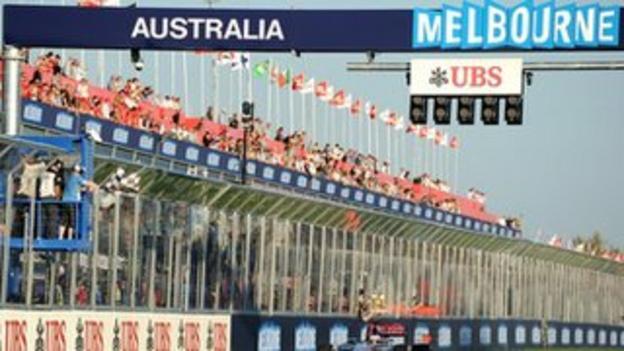 Mercedes driver Lewis Hamilton: "It's the start of a new season and the beginning of a new adventure for me with Mercedes. I can't wait to get to Melbourne, get out on the track and find out where we stand. The Australian Grand Prix is always an exciting race: the teams don't know how they compare in terms of performance and I love the circuit."

McLaren driver Jenson Button: "The start of a new season is always exciting as it's the culmination of months of hard work and planning. I've had some great experiences in Melbourne, having won the race three times, and I love the place. There isn't a better location in the world to be kicking off what will no doubt be a fiercely competitive world championship."

Red Bull driver Sebastian Vettel: "I like the beach and Melbourne is a great place to be. There's a nice vibe to the city and the food in the restaurants is always good - I like the track there too."

Lotus driver Kimi Raikkonen: "Australia is a nice place even though it's a long way from Europe. The circuit itself is not the most difficult on the calendar. It was good to score a point on my first time at Albert Park, and the podiums and race win in 2007 obviously made me happy. The circuit hasn't changed at all so I'm confident I know which way it goes! It's not a full time race track so the weekend starts pretty slippery."

Sauber driver Esteban Gutierrez: "Melbourne will be my first race in F1 and I'm sure it will be very special. It's a track that I don't know, but I'm confident I will be able to learn it quickly in the free practice sessions."

After a winter of huge change for Jenson Button, the Briton claimed his first victory of a world championship-winning season in Australia in 2009.

The win was all the more remarkable given that just one month earlier, Button had faced the prospect of leaving the sport following Honda's departure from F1. However, he was given a second chance when Ross Brawn took over the team and reformed them as Brawn GP just days before the season began.

Expectations were low for a team who had spent the previous two years near to the back of the grid, but impressive performances in testing meant they arrived in Melbourne as contenders and Button duly delivered.

After comfortably securing pole position, he was rarely challenged throughout the race and went on to win at a canter, with team-mate Rubens Barrichello finishing second to complete a remarkable achievement for the team.