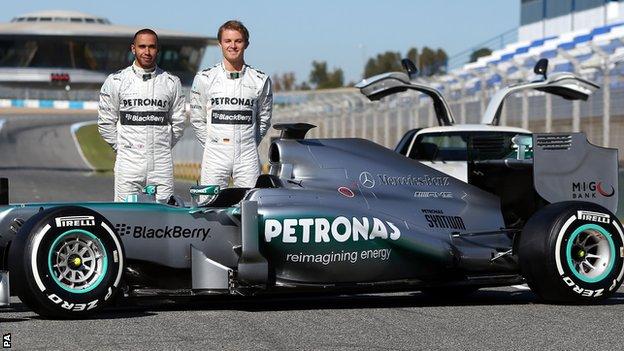 There is really only one big question ahead of the start of the 2013 Formula 1 season in Melbourne, Australia next weekend - can anyone stop Red Bull and Sebastian Vettel marching to a fourth consecutive world championship?

Pre-season testing has left an even murkier picture than normal.

There have been tantalising hints that the season will be incredibly close - McLaren sporting director Sam Michael, for example, believes that nine of the 11 cars are within a second of each other in terms of lap time.

And there have been flashes of pace from Ferrari, Lotus, McLaren and, most of all, from Mercedes.

Lewis Hamilton generated a degree of disbelief when he decided last year to join a team who, at the time, were struggling to score points. But Mercedes appear to have made a dramatic step forward from midfield mediocrity to become genuine contenders.

From talking about being happy to score points, Hamilton is now daring to entertain the prospect of wining the championship. "It's not 'no chance' and it's not 'definitely we will'," he said at the conclusion of testing.

Meanwhile, Ferrari are clearly in much better shape than this time last season and that suggests their lead driver Fernando Alonso will be an even more formidable rival for Vettel than he was in 2012.

Impressive though Vettel was, there is no question Alonso was the outstanding performer of last year.

In a car that started the season two seconds off the pace, and was never fast enough to take a pole position in the dry, Alonso took the title fight to the final race and lost out by only three points.

Alonso's helmeted face after climbing out of his car after the season finale in Brazil, eyes wide and staring straight ahead as he took in the enormity of the circumstances, is one of the pervading images of that year.

Now, after recharging his batteries, he is ready to dig deep again.

"Last year was the best of my career and I was very happy with the performance, but I think this year will be better," he said.

"We have a better starting point. I have prepared better. I am better than last year.

"You can always improve as a driver. I am more motivated than last year, but I need a better car than last year because we were too far from the leaders.

"I expect the team to have a better car. We don't ask to be half a second in front of everybody, but two-tenths behind is OK."

In that line, immodest though it may be, is what appears to be a fundamental truth. If Alonso can do what he did last year in a car that was usually more than half a second off the pace in qualifying, what can he achieve this year in one that appears to be closer?

Hamilton, also outstanding last year, should be in the mix. Give him a car close to the front, as Mercedes appear to have done, and he will extract every last ounce of performance from it.

Given half a chance, those two can give Vettel more than a run for his money.

Alonso, Hamilton and Vettel are the outstanding drivers of their generation. But F1 2013 is about so much more than that. This is arguably the field with the greatest depth of talent in history.

In Jenson Button, McLaren have a driver who, on his day, is perhaps better than anyone and alongside him the fascinating prospect of their yet-to-be-proven new signing Sergio Perez.

Red Bull have the immensely strong and determined Mark Webber, determined to give not an inch to his team-mate while operating in an environment where he faces a degree of open hostility.

There is the mixture of wisdom and fire in the Lotus line-up of Kimi Raikkonen and Romain Grosjean. And at Mercedes Nico Rosberg knows he is facing a career-defining season alongside Hamilton and has no intention of being steamrollered.

The one team who have done very little in the way of headline-grabbing during pre-season are Red Bull, and that has been greeted with suspicion. They must be hiding something, people believe. They simply cannot be that slow.

It is inconceivable that Red Bull have suddenly lost their way as the sport heads into the final year of a set of regulations which they have understood and exploited better than anyone else since their introduction in 2009.

Vettel and the design team, led by the unmatched Red Bull chief technical officer Adrian Newey, prevailed in tight battles in 2010 and 2012, utterly dominated in 2011, and came very close to winning in 2009 as well.

For the teams, this has been an era dominated by diffusers, the critical aerodynamic part at the back of the floor of the car.

Since early summer 2009, Vettel and his team have been the combination to beat in F1, even last year when on balance it was McLaren, not Red Bull, who had the fastest car.

Vettel's title triumph in 2012 hinged on a development that for four races in the autumn made the Red Bull unquestionably the strongest car on the grid.

It allowed the team to create more aerodynamic downforce from the rear of the car in the way they had in 2010 and 2011 before teams were prevented from placing their exhausts on the floor of the cars for aerodynamic effect - so-called "exhaust-blown diffusers" were banned.

Since last season, diffusers have still been blown, but imperfectly now, by exhaust gases that have to be guided to the critical area down channels, as on the Red Bull, or blasted across gaps, in the manner pioneered by McLaren and Ferrari last year.

Red Bull's great leap forward came about because Newey found a way of linking the DRS overtaking aid with his exhaust-focused diffuser design via the lower part of the rear wing, unlocking extra pace in the car.

But the avenue by which he did this has theoretically been closed off for 2013 - teams can no longer use the DRS on the upper rear wing to affect the aerodynamics of another part of the car, and the amount of time the DRS can be used has also been cut dramatically.

So the question is, can Newey still find a way to use the DRS to bleed off on the straights the downforce he wants to be able to use in the corners to generate the optimum lap time?

This question explains why Red Bull are among the teams pursuing a device that has come to be known as "passive DRS".

This is creating a series of channels in the car that, above a certain pre-determined speed, direct air in a manner such that it reduces the downforce created by the rear wing - and therefore cuts drag.

It is fiendishly difficult to pull off - Lotus spent much of last season trying and failing to make their system work. But if a team can do so there are potentially crucial gains to be had. And if any team can, it's Red Bull.

If this all sounds immensely complicated, that's because it is.

Formula 1 drivers possess a set of skills based on hand-eye co-ordination, balance and athleticism that is arguably unmatched across professional sport, but they can only show off their ability in the context of the laws of physics as they govern a grand prix car.

Vettel has excelled in the last three years in his ability to change his driving style to match the unnatural behaviour of a car with exhaust-blown rear aerodynamics, which requires a counter-intuitive driving style of pressing the accelerator to counteract a sliding rear-end mid-corner.

But while three consecutive titles make him statistically unmatched among the current field, that is not the same as being unequalled on the track.

With the likes of Alonso and Hamilton determined to shoot him down, it promises to be a great season. As long as Mr Newey has not produced another engineering miracle for Vettel to exploit.