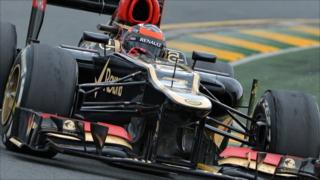 Kimi Raikkonen wins the Australian Grand Prix for Lotus after making fewer pit stops than his rivals in the opening race of 2013.

The 2007 world champion made two stops to his opponents' three, leading home Ferrari's Fernando Alonso and reigning champion Sebastian Vettel of Red Bull, with Felipe Massa fourth and Lewis Hamilton fifth on his debut for Mercedes.

The win is Raikkonen's 20th in Formula 1, and the Lotus team's first-ever win on Australian soil.