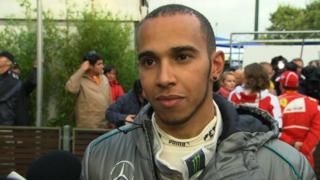 Mercedes's Lewis Hamilton is full of praise for his new team after finishing fifth at the 2013 Australian Grand Prix in Melbourne.

Hamilton admits he was hoping to run a two-stop strategy at Albert Park but says locking up while defending from Fernando Alonso meant he had to pit three times.

With the Malaysian Grand Prix on the horizon Hamilton feels positive about his car and the impending upgrades that are to come this week.