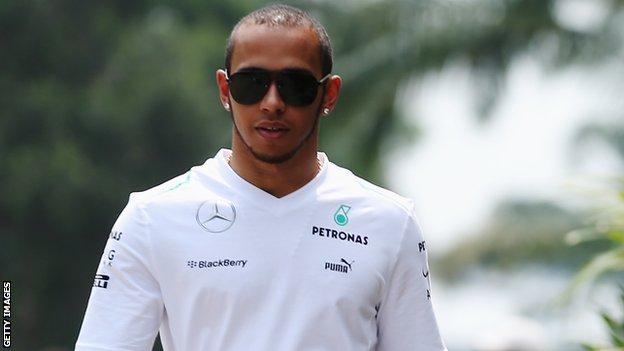 Lewis Hamilton does not expect a title challenge with Mercedes this year - but thinks wins are possible.

Hamilton finished fifth in the season-opening race in Australia on Sunday after qualifying third, but said he was not thinking about the title.

"We expected to be better [than Mercedes were last year] but not as high as we are now," he said.

"I'm aiming for consistency but in terms of performance we don't have that pure speed to compete for the title."

That is the reverse order in which those three drivers finished last year's championship and Hamilton said those were the three teams who had impressed him most in Melbourne.

But despite Raikkonen's victory, Hamilton said he felt Ferrari were in the best shape at the start of the season.

"Ferrari are the most impressive and then the Lotus and then Red Bull," Hamilton said. "That's my initial thoughts but everyone has their own opinion.

"Lotus did a great job but I think in terms of pure pace the Ferrari is quite quick.

"I wouldn't count us out just yet. I don't know about the race win. We were a long way off in the race last week, even if the set-up could have been better.

"I'm thinking we could possibly get a win this year, that's where I'm thinking."