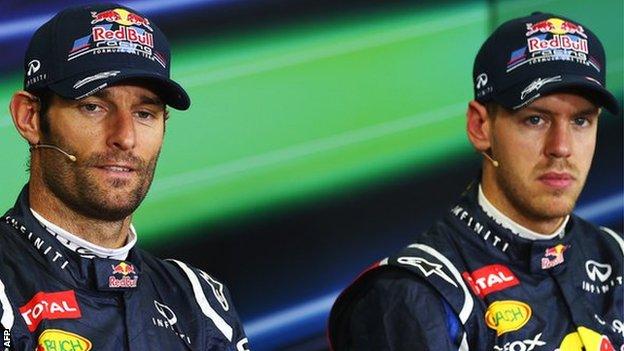 Pirelli has been asked to produce tyres with limited life to promote more pit stops and overtaking but the Red Bull drivers feel they are too influential.

Vettel added: "I hope we have enough tyres to survive the race."

The tyres are quite fragile and you only have to look at some of the slow-motion shots to see the amount of rubber coming off them. But then it's the same tyre for everyone

The world champion said the fast-wearing nature of the tyres meant that their performance was the determining factor - not that of the car itself.

"Tyre wear was pretty severe for everyone," Vettel said. "You end up going around way under the car. It's not a lot of fun but that's the way it is."

He added: "This afternoon we couldn't do that much [race preparation] because of the weather.

"It looked pretty OK [in terms of Red Bull's competitiveness] but quite a mess if you look at how long the tyres last. There is some footage to look at too; it doesn't look very nice, I have to say.

No other driver was so publicly critical of the tyres, and McLaren's Jenson Button said he expected them to be easier to deal with than at the first race of the season in Australia last weekend.

"I don't think there is a lot of degradation here," he said. "It is not an issue like we had in the first race."

But Red Bull team boss Christian Horner said: "We have had one race as a reference; let's see how this race pans out and we'll start to get a clearer picture.

"For sure, the tyres are quite fragile and you only have to look at some of the slow-motion shots to see the amount of rubber coming off them, which is quite surprising. But then it's the same tyre for everyone.

"The tyres for sure [have] a key role at the moment and I think they will be a decisive factor this weekend and it is a matter of finding the operating window in which they give performance and longevity.

"I think what we want to avoid is drivers cruising around under the performance of their car, unable to follow another car closely, otherwise it's not racing. But it's still early days so let's see a sample of two or three races and then be able to gauge from there."

Pirelli motorsport director Paul Hembery said he expected this year to be like the last two - that there would be a lot of discussion about excessive tyre wear and degradation early in the season but that it would decrease as the teams learned how to handle the tyres.

"It tends to be a phase at the start of the year, and after six to eight races, then it all changes. It will all move away as people start to get used to it. 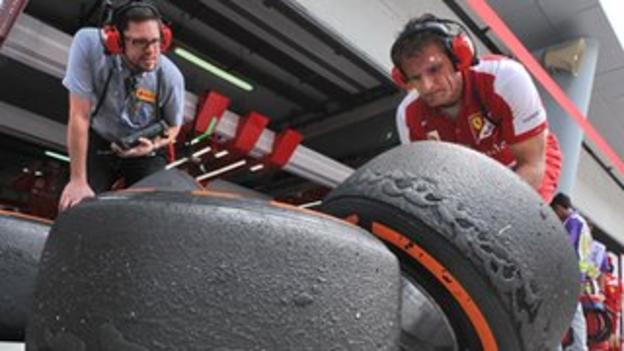 He added: "It starts off like that; the challenge is an interesting one. It's the same for every team. As the season progresses it becomes about the cars and drivers, as it should be."

Pirelli has introduced softer tyres this season, as it did from 2012 after its first year as monopoly supplier in 2011, in an attempt to liven up the spectacle.

Last year, races increasingly featured only one pit stop per driver as the season progressed, while Pirelli and the sport's power brokers prefer there to be two or three.

The medium tyre is about 0.7-0.8secs faster than the hard, according to Hembery.