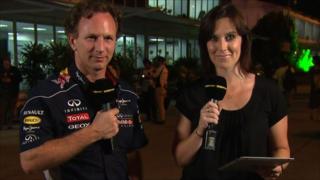 Red Bull's Sebastian Vettel took pole in Sepang and was nearly a second quicker than Felipe Massa, who edged out Ferrari team-mate Fernando Alonso with the last lap of the session.

Horner says he is hoping for consistent weather for Sunday's race after rain led to mixed conditions in qualifying.