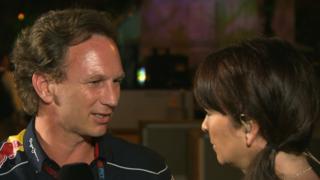 Mark Webber led after the final pit stops and the drivers were told to hold position to the end of the race, but Vettel battled with the Australian to take the lead and eventually the victory.

Speaking to BBC F1 presenter Suzi Perry, Horner believes his two drivers "will move on" from the incident.