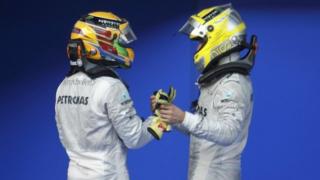 Mercedes drivers Lewis Hamilton and Nico Rosberg both admit to having mixed feelings after finishing third and fourth respectively at the Malaysian Grand Prix.

Hamilton admits he wasn't proud about the circumstances which led to him getting his first podium for his new team and praises his "mature" team-mate.

Rosberg is pleased with his car, but disappointed team orders meant he had to settle for fourth place.