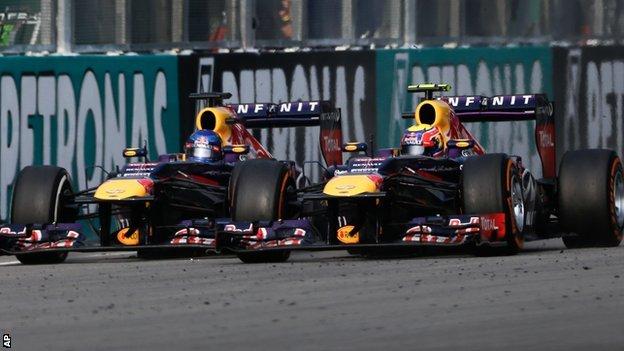 WHEN TEAM ORDERS DO NOT WORK

Sebastian Vettel disobeyed team orders to pass Mark Webber and win the Malaysian Grand Prix. That's not right, and I lost a bit of respect for him over that.

Personally, I'd rather there were no team orders, but because they are accepted they are seen across the world, and it becomes a big controversy.

All teams want to take home the maximum points possible and after the final pit stops Red Bull had 43 points in the bag for the constructors' championship.

In that situation, the last thing a team need is the two drivers running into each other.

At Red Bull, there are probably some underlying team orders there that mean the drivers hold position in that situation - and that's what they were told to do on the radio in Malaysia.

But at the end of the day racers are racers. Michael Schumacher would theoretically have done the same thing. He's done it many times. They're great drivers. You've got to allow for that.

Because of their tyre strategy, in that last stint Webber was on the hard tyre and Vettel was on the medium tyre.

The medium is a little bit quicker and Vettel put himself there at the end of it knowing that if he was going to be racing with Fernando Alonso or whoever he would have a tyre he believed was quicker and he could go racing with them and pass them.

It just so happened that it was Webber he was racing.

I think he probably got a little bit upset because he wasn't able to carry out the strategy he planned for the race.

At the same time, Webber did try to squeeze him into the pit wall when Vettel was coming up to pass him with the DRS overtaking aid. So Sebastian probably saw a bit of red mist and went for it.

If Webber had got the bit between his teeth, hung on for another lap and done Vettel again, we could have had a real good battle. But Webber didn't. He fell out of it and let it all go.

Did he do that because he knows, deep down, the team favour Vettel over him?

All the way along we have always asked whether there is a de facto number one and number two at Red Bull and I think there is.

Vettel pushed the limits a bit in Malaysia, but if he wins the world championship by anything less than eight points people will look back at Malaysia and say 'wasn't that a clever thing to do'?

WHEN TEAM ORDERS DO WORK

There was a similar team orders situation at Mercedes but it resolved itself in a very different way and that shows the respect the drivers have for the team principal.

Ross Brawn has won seven world titles with Schumacher and when he comes on the phone you probably respect what he says.

The team boss says, we want to bring the cars home, this is the way it's going to be.

It might be different at the next race, but if you respect the call of the team then if it happens the other way around, it will be OK.

It is a long old season and Nico Rosberg accepted, probably reluctantly, that was the situation and he held station behind Lewis Hamilton.

At the same time, when Brawn came on the radio he was authoritative.

At Red Bull, Christian Horner came on and said: "Seb, this is getting silly." That's not an order; it's just a statement.

You have to say what you want to do. At no point did Red Bull - as far as we know - say to Vettel: "You have to stay behind Webber."

If Horner had said that, you would say Vettel broke the rules.

At the moment, there is an opening to say Vettel was a racing driver and he wasn't told not to pass him, but was told to turn the engine down and Vettel was going a bit quicker.

Fernando Alonso retired from the race when his Ferrari's front wing, damaged in a touch with Vettel on the first lap, broke off and sent him into the gravel trap at the start of lap two.

Ferrari say it was their call for Alonso not to stop at the end of lap one, despite his wing being very obviously badly damaged.

I would say that is true - the last thing Alonso will have seen of the wing was when he got into the car on the grid and won't have known what state it was in - and that it was a very stupid decision.

Their justification was that they were hoping it would survive until the track had dried enough for slick tyres - so they could change the wing and the tyres at the same time.

But it was the end of the first lap in a race that was clearly going to be turmoil most of the way through, one front wing pillar was broken, the front wing was dragging along the ground on the left-hand side.

In that state, the chances of it surviving a lap, never mind three or four, are nigh-on zero.

If they had come in and put on another set of intermediates and a new front wing, Alonso would probably have ended up scoring decent points and come eighth or ninth at least.

Ferrari have made a string of strategy errors in the last few years and you have to say there is a wider problem there that needs to be addressed.

It wasn't as if it was a snap decision - it happened at the start and the first lap is nearly two minutes long.

If it had been the heat of the moment, you can understand them leaving it. But it was never going to work with the wing so badly damaged.

Kimi Raikkonen dominated the first race of the season in Australia and looked very strong on Friday in Malaysia as well. But from Saturday morning they suddenly dropped off the pace.

They say they did not change the car. We have to assume that is correct, but in reality the way the weekend was going, with support races on the track, the circuit is going to evolve.

The car had a very nervous rear end; it stepped out quite a lot. It was difficult to drive, and I don't think they went with the track. And you have to do that.

Maybe they have come out with a car that functions very well on its set-up and they are not sure how to make the next step with it.

Force India's race was wrecked by pit-stop problems on both cars caused by the heat in Malaysia.

Like the leading teams, Force India have wheel nuts that are retained within the wheel, to make pit stops quicker.

The nut is in a sort of sleeve and they were seizing up. All these things have a very tight tolerance and one part was expanding more because of the heat.

They are probably both aluminium components, and when you get aluminium on aluminium seizing up, it just welds itself together, so they couldn't make sure the wheel was tight.

It's one of those things that never bites you until it bites you.

It's disappointing for them but it's not all bad - they were quick and doing a very good job until then. At the moment, it looks like Force India are going to have a decent season.