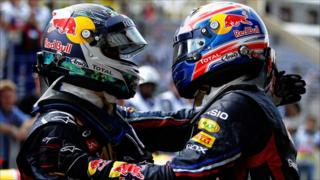 Vettel and Webber - best of enemies

for causing the latest in a series of incidents between the pair, who have had a fractious relationship since an infamous coming-together at the 2010 Turkish Grand Prix.

Since they became team-mates in 2009, Vettel has won the World Championship three times, with Webber taking nine wins to Vettel's 26.