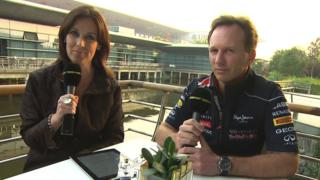 Inside F1 on Red Bull tensions

Lee McKenzie is joined by Red Bull team principal Christian Horner for Inside F1, as they discuss the in-team tension between Sebastian Vettel and Mark Webber ahead of the Chinese Grand Prix.

The two drivers had a public spat following Vettel's decision to ignore team orders in Malaysia and overtake his team-mate to win the race.

Also on Inside F1 they look back on Friday's two practice sessions in Shanghai, as Nico Rosberg in the Mercedes and Felipe Massa in the Ferrari topped P1 and P2 respectively.