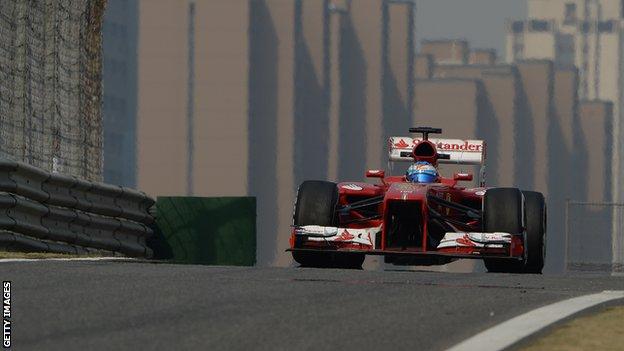 Fernando Alonso set an impressive pace as he led team-mate Felipe Massa to a Ferrari one-two in final practice at the Chinese Grand Prix.

Alonso was 0.622 seconds ahead of the Brazilian, who edged Mercedes driver Lewis Hamilton into third place.

The Red Bulls of Sebastian Vettel and Mark Webber were in fourth and fifth ahead of Adrian Sutil's Force India and Lotus driver Kimi Raikkonen.

Every time I have seen the Ferrari on the track the rear has given up before anything else, so they will get a lot from the [soft] tyre

Sauber's Nico Hulkenberg was 10th, ahead of the Toro Rossos of Jean-Eric Vergne and Daniel Ricciardo.

Ferrari's pace underlined their strong showing of Friday, when Massa had set the fastest time on the 'soft' tyre in the second session.

The car appears less comfortable on the 'medium' tyre on which the vast majority of the race will be run - Alonso was fifth fastest, just ahead of Massa and a second off pace-setter Hamilton, when the teams ran that tyre earlier in the final practice session.

However, Hamilton's final fastest time did not represent the true pace of the Mercedes - before completing a whole lap on the 'soft' tyre, the 2008 world champion had done a fastest first sector time before backing off.

That would have meant his tyres had lost the edge of their grip by the time he did his full lap - and the 'softs' are degrading rapidly on the Shanghai International Circuit.

Hamilton's team-mate Nico Rosberg was second fastest on the 'medium' tyre but had to abort his 'soft' tyre qualifying simulation run when he encountered 'bottoming' - the car hitting the track too hard.

He said he felt something had broken in the suspension.

Red Bull were there or thereabouts on both types of tyre without showing the electrifying single-lap pace they demonstrated at both previous races this season.

BBC F1 technical analyst Gary Anderson said that a characteristic of the Ferrari car may be helping them get the best out of the 'soft' tyre in China.

"If you need traction the soft tyre will help you," he said, "because a grippier tyre always improves the rear grip more than the front - and every time I have seen the Ferrari on the track the rear has given up before anything else, so they will get a lot from that tyre."

Williams continued to struggle, with Pastor Maldonado and Valtteri Bottas evenly matched but two seconds off the pace.

And Raikkonen's team-mate Romain Grosjean, who had complained of a mysterious lack of downforce on Friday, was languishing down in 18th place just ahead of the Marussias and Caterhams.