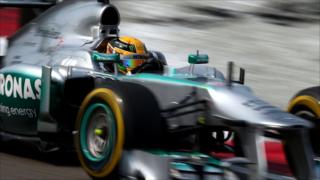 Lewis Hamilton claims his first pole position for Mercedes at the Chinese Grand Prix ahead of Lotus's Kimi Raikkonen and Ferrari's Fernando Alonso.

Mark Webber stops out on circuit without enough fuel to continue during the second part of qualifying and will start from the back of the grid, while his Red Bull team-mate Sebastian Vettel will begin the race from ninth after choosing not to set a time in Q3.

The pole the 27th of Hamilton's career, and he will be seeking to become the first man to with the Chinese Grand Prix three times in Sunday's race.