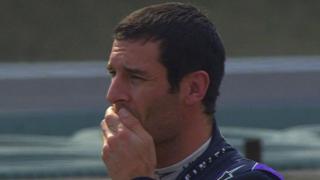 Webber has fuel problem in qualifying

The Australian pulled off the track during P2 after apparently having run out of fuel, and says it was a "disappointing" way to exit qualifying.

Webber ended up qualifying in 14th, but has since been relegated to the back of the grid for the race as his Red Bull did not have enough fuel in the tank to provide an adequate fuel sample to stewards.