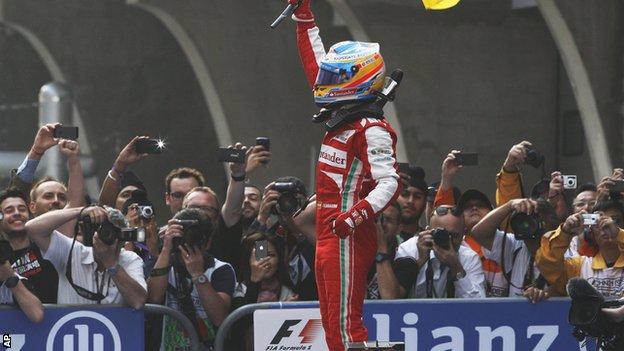 It was the radio message with about 10 laps to go that revealed the true extent of Fernando Alonso's superiority in the Ferrari during the Chinese Grand Prix.

The Spaniard, on fresh tyres after his final pit stop, had just set two consecutive fastest laps and was pulling away from his closest de facto challenger Kimi Raikkonen's Lotus by half a second a lap or more when engineer Andrea Stella came on the radio to tell him to cool it.

Asked about it afterwards, Alonso smiled and said: "Well, you always push. In a Formula 1 race it's impossible not to push but it's true that we had some pace, maybe, in the pocket. Not easy to know when to use it depending on the state of the tyres."

It was as dominant a performance as has been seen for some time.

Perhaps Raikkonen would have pushed Alonso harder had not wrong settings on his Lotus messed up his start and had he not damaged his front wing in an incident with McLaren's Sergio Perez. But it's hard to see how Alonso would have been beaten - especially as Lotus said Raikkonen's wing damage cost only in the region of about 0.15secs per lap.

He looked the man most likely to win from the moment he made the traditional Ferrari scalded-cat start, blasting past Raikkonen and on to Lewis Hamilton's tail.

Rivals knew before the race that Mercedes's tyre usage was more extreme than that of Ferrari and, particularly, Lotus and so it proved. Despite Hamilton's scintillating pole lap, Alonso closed up and was into the lead by the start of lap five.

It took a while for the varying strategies of the race to settle down and the big question was whether Vettel could turn his inverted tyre choice into a challenge at the front.

But the world champion never got anywhere near far enough ahead of Alonso in the first stint to make it work, partly because he was trapped behind Nico Hulkenberg's well-driven Sauber, and long before half-distance Alonso was in control.

It was classic Alonso - a sniff of victory and he grabbed it like a vice and never once looked like letting go.

The win was the 31st of his career, which draws him level with Nigel Mansell in the all-time winners' list behind only Michael Schumacher on 91, Alain Prost (51) and Ayrton Senna (41). Mansell congratulated him on Twitter after the race.

"I'm very proud of every win and being in one very select group of drivers," he said. "Hopefully I can keep winning a little bit more and be closer to the other guys, Ayrton and Alain. I think Michael will be very difficult to reach or impossible to reach so let's concentrate on the other two."

What the win means for the balance of the season is difficult to say at this early stage, but what is certain is that Ferrari are in very much better shape than they were this time last year. Which surely means Alonso will be a formidable contender for the rest of the year to win that elusive third title.

It was ironic in many ways that such an impressive win came at the climax of a weekend that had started with talk about the possibility of Felipe Massa becoming the first of Alonso's team-mates to out-qualify him five times in a row.

Talk of Alonso's demise, or his feeling the pressure of Massa's improved form, was always going to be premature or misguided.

The Spanish media quizzed him on the subject on Thursday, and he responded with humour: "I haven't slept since Australia. I'm only eating white rice. I'm losing my hair. A huge drama." The drama, clearly, was in people's imaginations.

Ferrari team principal Stefano Domenicali was bang on when asked to sum up Alonso's performance. "Extraordinary. Fantastic," he said.

Ferrari's victory took place against the backdrop of increasing grumblings about the current nature of Formula 1.

Complaints that the current Pirelli tyres are creating a kind of shadow-race, where the drivers are only driving to the limit of their fragile rubber which defines everything, have been around since the Italian company became the sport's sole supplier in 2011.

But they have grown in volume this year after Pirelli produced yet-softer tyres in an attempt to ensure drivers have to make at least two pit stops in every race and that there are varying strategies between the teams.

Pirelli is only doing what it has been asked to do and in that context the Chinese Grand Prix was a great success. Vettel, struggling for pace throughout the weekend, chose to sacrifice qualifying and start on the 'medium' tyre and hope he would benefit from those ahead struggling in the early laps on the 'soft'.

It led to an intriguing rather than thrilling grand prix as the drivers let their tyre strategies play out.

As Vettel put it: "I'm not sure it's that great for the people to watch because there are a lot of overtakings that are pretty straightforward because in the end you are racing yourself and just try to make it to the end as fast as you can. What I mean is look after the tyres, try to manage the gaps.

"You wave the people by or they wave you by - as in they don't resist - because there is not much point because you slow yourself down.

"That is how racing is these days but nonetheless it is the same for everyone and three guys were better than us today."

The thought that drivers are not pushing to the limit in a sport that is meant to be the ultimate test of man and machine has led to some disquiet.

On the eve of the race, Mark Webber - one of the most outspoken critics of the current F1 - said: "It'll look good in the first five laps with everyone fighting but it's a little bit WWF at the moment." He meant wrestling, rather than wildlife.

Red Bull, though, have a vested interest. They believe they have a superior car that is being held back by the tyres.

But while that appeared as if it may have been the case in the first two races of the season, it was clearly not so in China, where Red Bull were not quite at the sharp end through practice and qualifying.

And the difficulty with any argument that claims the pace of the cars is dictated solely by tyres is that there are differences in speed between drivers in the same car (see Raikkonen and Romain Grosjean, for example, or Alonso and Massa) and also between different cars - the Ferrari was faster than Lotus, which was faster than the Mercedes and so on.

Some hark back to the 'tyre-war' era of the late 1990s and early 2000s as an example of drivers being able to push to the limit throughout, but those who were there say that isn't the case either.

Raikkonen said: "If you take six or 10 years ago still you could not always push 100%. It's normal. These tyres are very good in qualifying with grip and in some places you have to look after them a little bit more than others, but it's not any different from last year so I don't really understand why people are complaining so much."

There are rumours that Pirelli will supply more durable tyres from the start of the European season in Spain next month - which they will not comment on for now - but is hard to imagine them deviating too far from a model they have pursued for three years.

Of course, it is possible to engage in a wider philosophical argument about whether F1 wants the current model to stay, but for now Raikkonen summed it up nicely when he was asked which form of the sport he preferred.

"It makes no difference," he said, "because this is what we have and you'd better like it or do something else."