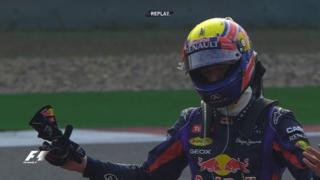 BBC Sport looks back on a weekend to forget in China for Mark Webber as his difficult start to the F1 season continued.

Disqualified from qualifying, the Red Bull driver managed to cause a collision before his race was ended prematurely when a rear wheel came off his car.

To round off a sour weekend, the Australian was hit with a grid penalty and will be demoted three places at next weekend's Bahrain race.