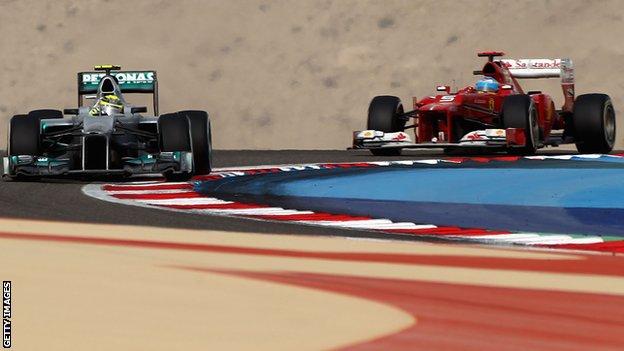 Formula 1 boss Bernie Ecclestone says there is "no reason" why this weekend's Bahrain Grand Prix should not go ahead.

A week of protests to coincide with the race began on Friday, organised by the opposition to the ruling royal family.

The New York Times reported that authorities in Bahrain were increasing security following a series of explosions in the country.

Ecclestone told the AFP news agency: "There's no reason why [the race] shouldn't be [a success]."

The explosions in Bahrain were reported to include a gas cylinder that set a car ablaze in the financial district of the capital Manama.

"I'm happy to talk to anybody about this, as I did before," he said, citing his meetings with Bahraini opposition party al-Wefaq last year in London and the Middle East.

She added that Bahrain "will ensure appropriate security measures are taken during the F1 race and will take enough measures, as in all other countries which host such international sporting events".

The opposition and government resumed reconciliation talks in February for the first time since 2011, when protests were crushed and at least 35 people died, but little progress has been reported.

Protestors have told the Reuters news agency they see an opportunity to use the race to highlight what they say are injustices still being committed against them.

The 2011 Bahrain Grand Prix was postponed and later cancelled after month-long pro-democracy protests were crushed.

Ecclestone said he was "extremely sympathetic" to the opposition in Bahrain, adding: "Don't forget, I was the one, when we had apartheid in South Africa, who pulled the race."

Last year's race went ahead after Ecclestone and governing body the FIA said they had been assured the kingdom was safe for F1 personnel.

Before the race, Force India mechanics were caught up in an incident in which a petrol bomb bounced off the roof of their car as protestors battled with police on the main highway from the circuit into Manama.

The next day the team skipped the second practice session to ensure their personnel could return to their hotel before dark.

But team deputy principal Bob Fernley said: "Lightning doesn't strike twice in the same place. I am not expecting any issues at all."

Red Bull's Sebastian Vettel won the 2012 race, ahead of the Lotus pair of Kimi Raikkonen and Romain Grosjean.