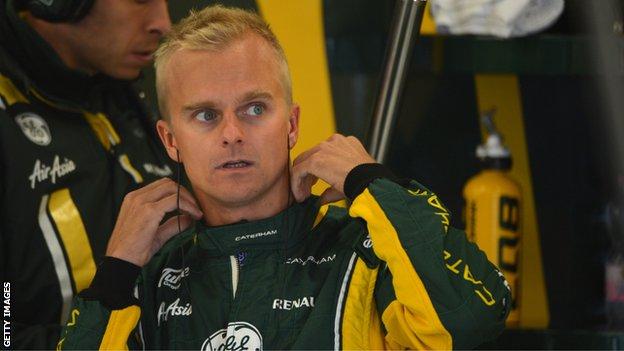 Heikki Kovalainen has rejoined Caterham as a reserve driver after leaving the team at the end of 2012.

The Finn, 31, will take part in the first practice session at the next grands prix in Bahrain and Spain.

Caterham have had a poor start to the 2013 season, outpaced by rivals Marussia at the back of the grid.

A race winner for McLaren in 2008, Kovalainen said: "It's good to finally be able to announce how I'll be helping the team in 2013."

The Caterham F1 team replaced their 2012 driver line-up - which included Kovalainen and Russian Vitaly Petrov - with Charles Pic and Guido van der Garde for this season. Both drivers have just one season's experience between them.

Many of the F1 teams operating towards the back of the grid have come to rely on drivers who bring much-needed sponsorship money in recent seasons.

Kovalainen, who has five years' experience in the sport, will help develop the team's planned upgrade for the Spanish Grand Prix, which they hope will improve their chances against Marussia.

Cyril Abiteboul, Caterham team principal, said: "Having invested in Heikki for our first three years of competition it would be a waste not to leverage the valuable expertise he brings.

"As F1 is a team sport, he will also provide support to Charles Pic and Giedo van der Garde, who are both doing a good job in their first months with the team."

Kovalainen said on Twitter during Wednesday: "I visited the Caterham factory last Sunday, they've made big steps forward there and I had a run in their new [simulator] which was also very good."