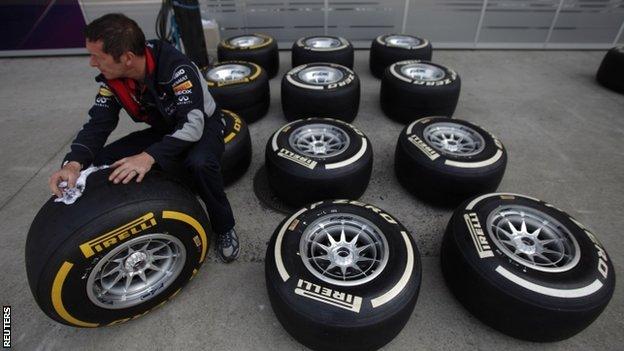 Pirelli is believed to be considering changing the tyres it is supplying to Formula 1 this season in the wake of criticism that they may be too soft - but it's questionable whether that is the right thing to do.

The way the cars work on their tyres is a combination of car design and tyre usage and how the two are affecting each other.

Red Bull have been applying pressure on Pirelli to produce harder tyres, feeling that an inherent car advantage they have is being disguised by them having to compromise the car's pace to work best with the tyres.

Red Bull seem to have the best understanding of the aerodynamics of their car - and particularly the Coanda system that uses the exhaust gases to enhance rear downforce.

Their car has been designed around using the Coanda to the best effect, and Sebastian Vettel has adapted his driving style to go with it.

That technique works particularly well on 90-degree corners, such as the ones which abound at this weekend's race in Bahrain.

But it works less well in a long corner because there is not the immediate transition from turn-in to exit; there is a delay when the driver is just sitting there as a passenger for a while. So he can't carry the front downforce that Vettel likes to use on the car because the car is too nervous.

China, the last race, has two long corners that are critical to lap time - so it's perfectly logical that Red Bull would not show as well as it might at other tracks.

If Pirelli wants to help the teams, it should change the tyres, but I don't think that's what Pirelli should be doing.

China is also what is known as a front-limited track - the front tyres wear out more quickly than the rears and the predominant handling characteristic is understeer. When the car understeers, you can't get back on the throttle quickly enough to take the benefit from the Coanda exhaust system.

On the evidence of last year, all the teams will have been developing their cars to enhance the Coanda exhaust effect to benefit a weak rear tyre.

But now it is the front tyres that are the weak point, and the Coanda is making up for a problem that no longer exists. With these tyres it will be tough to get the most out of the Coanda system and they do not allow that development direction to work.

The state of play elsewhere on the grid

Red Bull's rivals have different characteristics. Mercedes have a car that is good in qualifying and less good in the race - their tyres have been going off too quickly.

Ferrari have a car that is quite good in both conditions with a better balance between the two overall, and they had the quickest car in the race in China, at least in winner Fernando Alonso's hands.

The concern for Ferrari is that if the car is good in both areas, you have to move the whole package forward.

Whereas if there is a specific problem - such as on the Red Bull or Mercedes - you can focus on fixing that by focusing on getting the tyres to work well in whichever condition they are weakest.

Ferrari need to pay attention to whether their Coanda exhaust system is good enough at the circuits with 90-degree corners.

Lotus, like Ferrari, are pretty good in both qualifying and race - they understand how the car and tyres work with the circuits. And, like Ferrari, they need to move the package forward.

McLaren have been very poor in qualifying but a lot faster in the race. That means they just cannot get the tyre working for qualifying but speed is in there somewhere and that is what they need to focus on.

So if Pirelli go off and do a different tyre, it will be playing into the hands of some teams and not all.

Is that right? I don't think so because when you introduce a tyre at the beginning of the year the challenge for the teams is to pick up that performance and re-hash their car to suit the rubber. The tyre company should not pander to an individual team that has a bit of a negative.

And don't forget that all the teams had some experience on these 2013 tyres in Friday practice in Brazil at the end of last season and all pronounced themselves happy.

Last year, Pirelli felt it had been too conservative towards the end of the season and the races were devolving down into one-stop strategies.

Pirelli will not use their soft tyres at the Bahrain Grand Prix this weekend after concerns about how quickly they wear out. No driver managed more than seven laps on soft tyres in China last week. Instead, the medium and hard tyres will be the compound of choice this weekend.

It introduced a softer tyre for this year to stop that happening, and the move has succeeded, but now the discussion is to change it around again. There is no logic in that.

Pirelli has already made a similar step for Bahrain this weekend - by abandoning the idea of using the soft and hard tyres and bringing the medium instead of the soft.

But the change in what the tyre requires of the car - the focus now on needing more front grip not more rear grip - is not to do with the tyres being softer, it is to do with them being a different construction.

If Pirelli wants to help the teams, it should change the tyres, but I don't think that's what Pirelli should be doing.

At the moment, Lotus and Ferrari have been strong, Red Bull have been good in particular tracks. It has been moving around and it will continue to do so at the tracks that are coming up. It won't just be one winner all the time.

Change the tyres and that might not be the case.