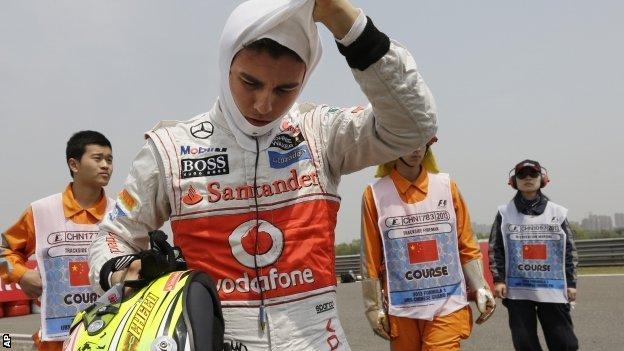 Sergio Perez admits he is feeling the pressure of driving for McLaren and not delivering the results expected of him.

McLaren have had a tough start to the year with an uncompetitive car and Perez was well off the pace of team-mate Jenson Button in China on Sunday.

The Mexican said: "I definitely feel the pressure. In McLaren, everyone is watching your performance, every practice, every single race."

But he said he had been surprised to receive so much criticism after China.

"I find it quite amazing that after three weekends, when I had two good weekends in terms of maximizing the car, after one bad weekend I received so many criticisms, but this is quite normal for a team like McLaren," Perez said.

"I never thought about it before and if I'm totally honest I'm not bothered about it. I'm here to do my job and I will try my best this weekend. I will keep trying my very best, which I have been doing from the start."

Perez, who is in his third season in F1 after joining McLaren from Sauber, has been told by team boss Martin Whitmarsh that he needs to up his game and Perez admitted Button had been a tough rival so far this year.

"Jenson has been extremely difficult to beat," he said. "In China, I was quite off the pace from him. Never got close to him. With the car we have he is doing an extremely good job, you have to say.

"I want to beat everyone, not only Jenson. To be successful, you have to win. That is what I want. It's normal.

"When you come to McLaren you are expected to come and win. I am the first one hungry for success. I am trying to do my best, it is quite normal and McLaren are a very ambitious team. Sooner or later I will have good success with this team."

Button said: "Checo has fitted into the team very well. Out of the car he is going about it in the right manner, no doubt about it.

"The last race was difficult for him and it started on Friday when he had his difficulties (Perez went off the track in each of the two practice sessions).

"I don't know what was going on in the race, but there is a lot more pressure on your shoulders at a team like McLaren but he's strong mentally and as long as he keeps his head down and keeps working he's going to improve."